In case of finding any request that sits WAF’s rules, it will be blocked, and its sender will get a 403 response.

AWS WAF has a capacity for its ACLs: each List can hold up to 1500 WCU (WAF Capacity Unit). We will speak about WAF’s limits in the AWS WAF limitations. Also, check the AWS WAF Web ACL capacity units (WCU).

The most inconvenient limit is that one Application Load Balancer can have only one ACL attached.

Also, I asked the AWS team about performance – will attaching a WAF ACL to an ALB/CloudFront will affect its response time, but no ACL or number of rules in it will affect a target anyway.

So, in this post we will spin up a test application in Kubernetes, will go through main WAF concepts, will see how Rules can be configured for an ACL, will create such an ACL, and will configure its monitoring with CloudWatch and с Prometheus.

Let’s use a simple Kubernetes Deployment that will create a Kubernetes Pod with Nginx, Service, and an Ingress resource. This Ingress with AWS Load Balancer Controller will create an AWS Application LoadBalancer.

Deploy it, and check the Ingress and its ALB:

Check for the response of this ALB:

Everything works here, let’s go to the AWS WAF.

Go to the AWS Console > WAF, click on the Create web ACL: 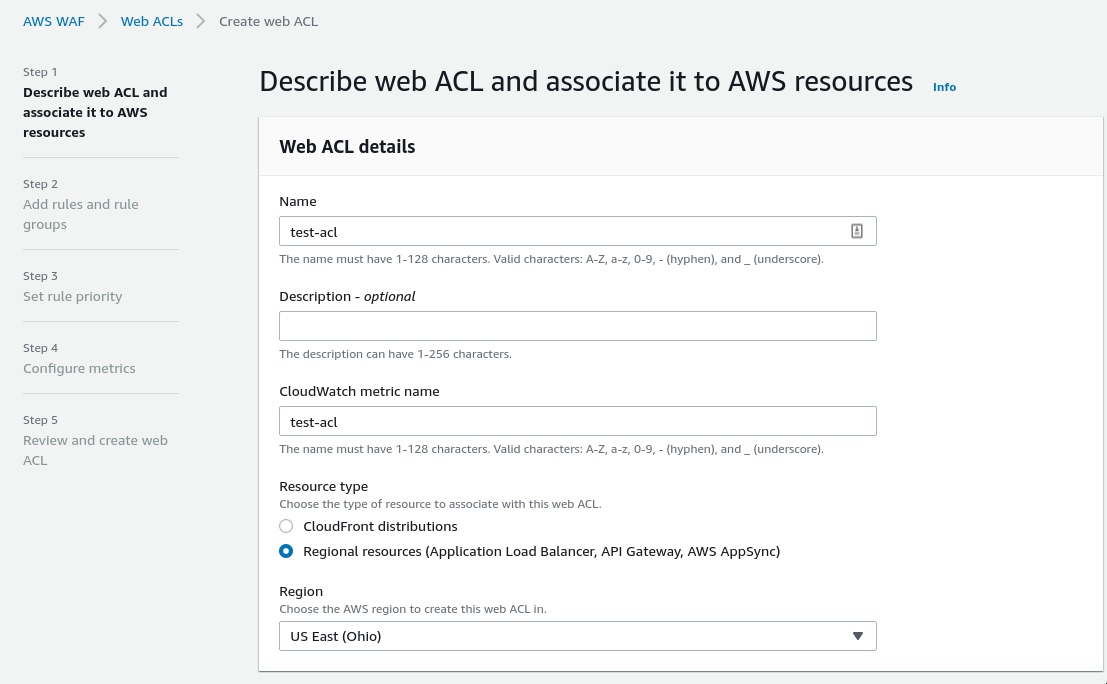 Next, find an ALB to be protected: 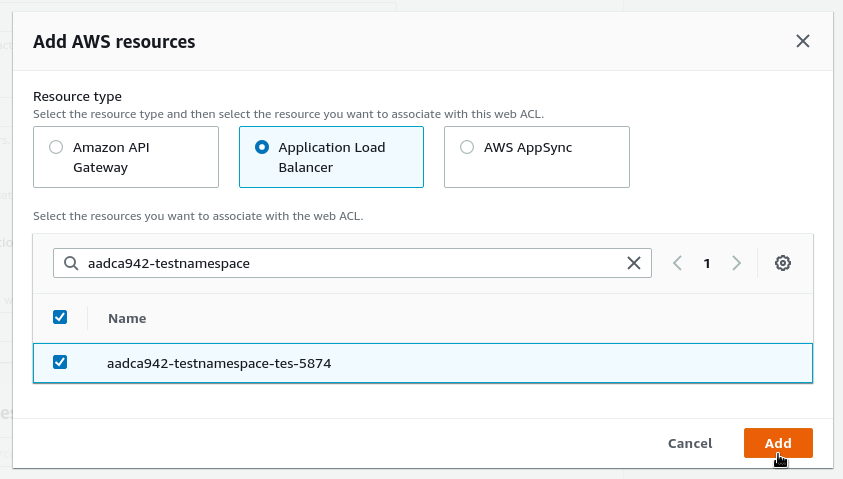 And from now, every request sent to this AWS ALB first will be sent over a chain of the ACL’s rules, and then it will be or declined with the 403 error, or will be passed to an application behind this load balancer.

We will add rules later, for now just leave the default action set to the Allow: 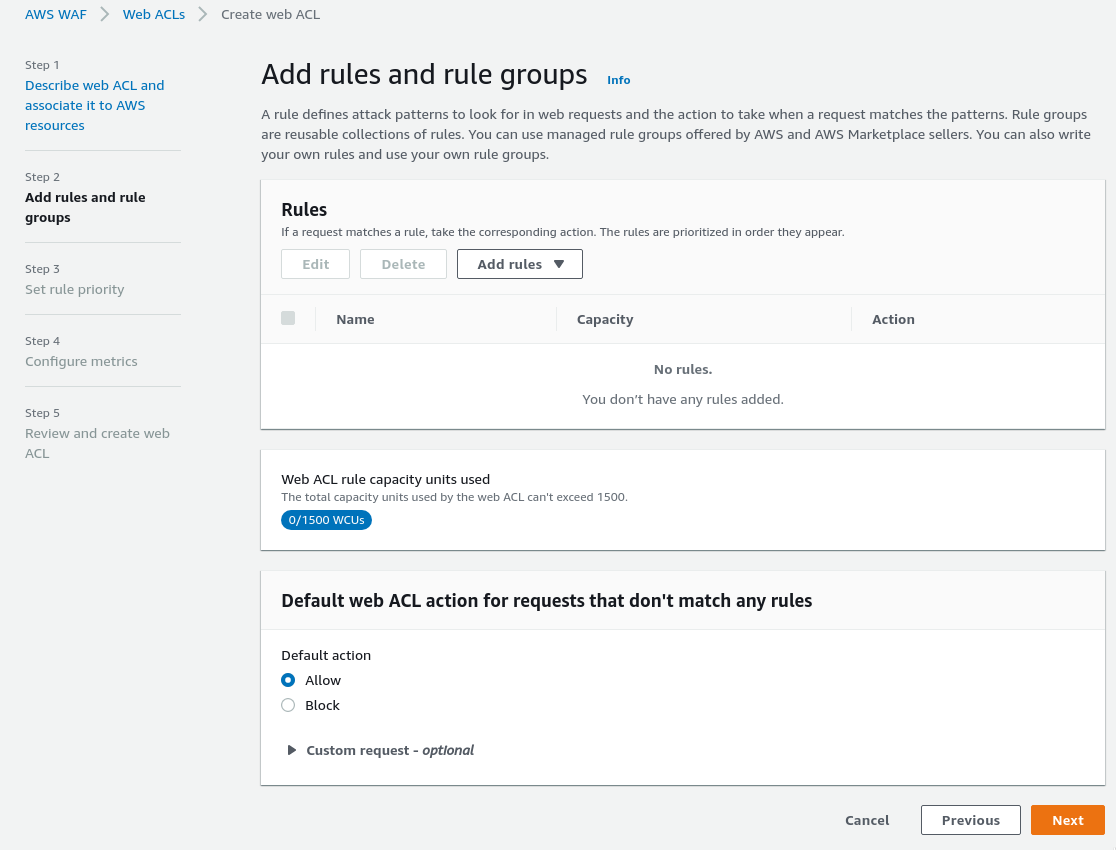 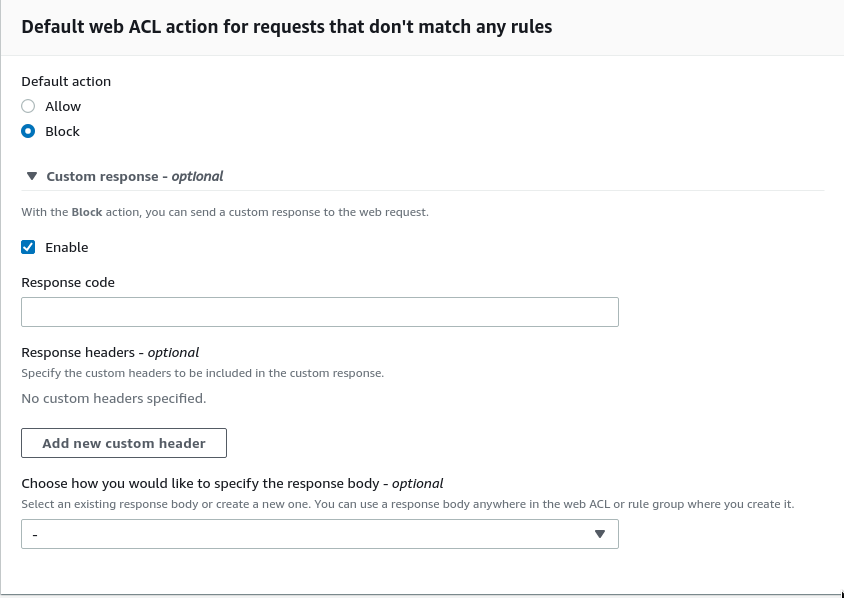 And again, for now just leave everything by default here, as this can be configured later.

Similarly to common firewalls, you can configure rules priority in an ACL: the first rule matching a request will be applied:

Skip for now too.

CloudWatch will be configured a bit later, so skip it as well: 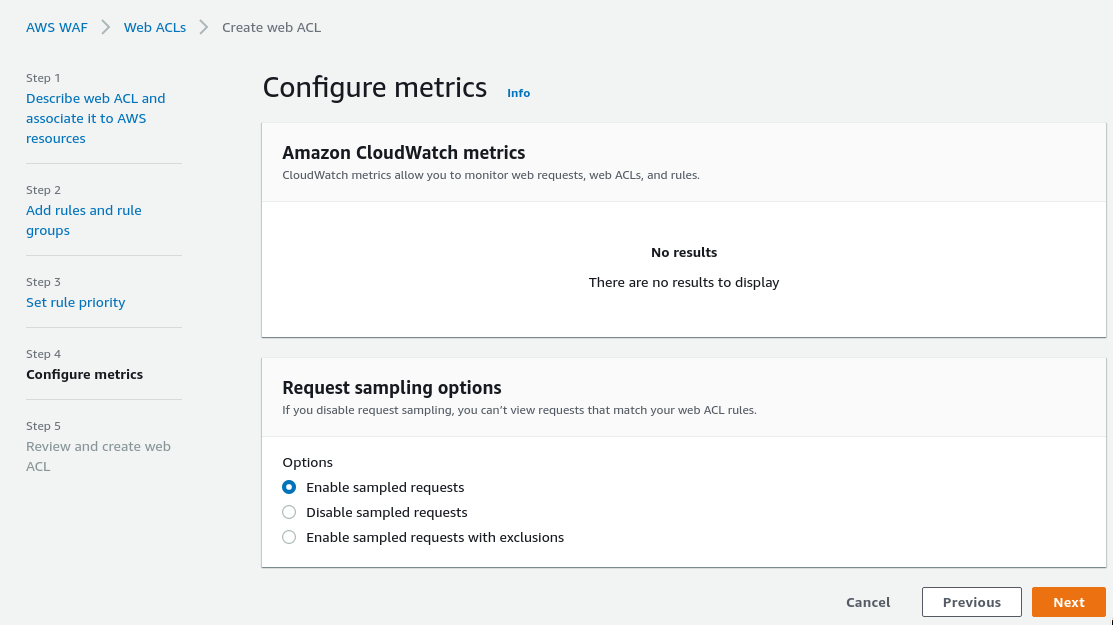 Run curl to the testing ALB to get some traffic and graphs: 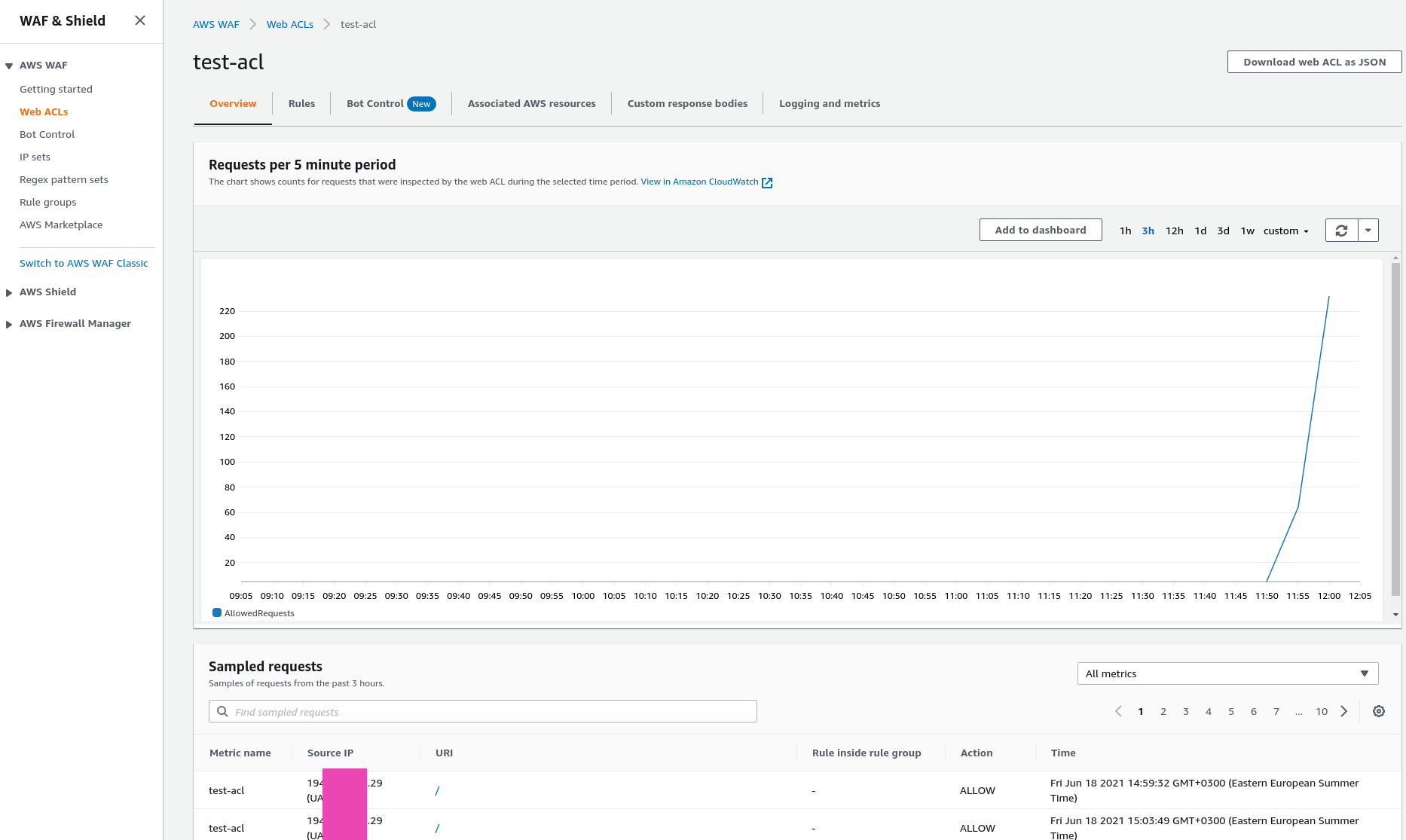 The IP set allows the creation of a set of IPs or IP ranges that can be used later in rules.

For example, we can create a set of our office IPs to make an Allow rule. See Creating an IP set:

Pay attention to the AWS Regions here: for a CloudFront, you have to choose the CloudFront (Global), for all others – a region, where a secured resource is located.

Get your current IP (my office):

Create an IP Set, use the /29 mask to include all our office IPs: 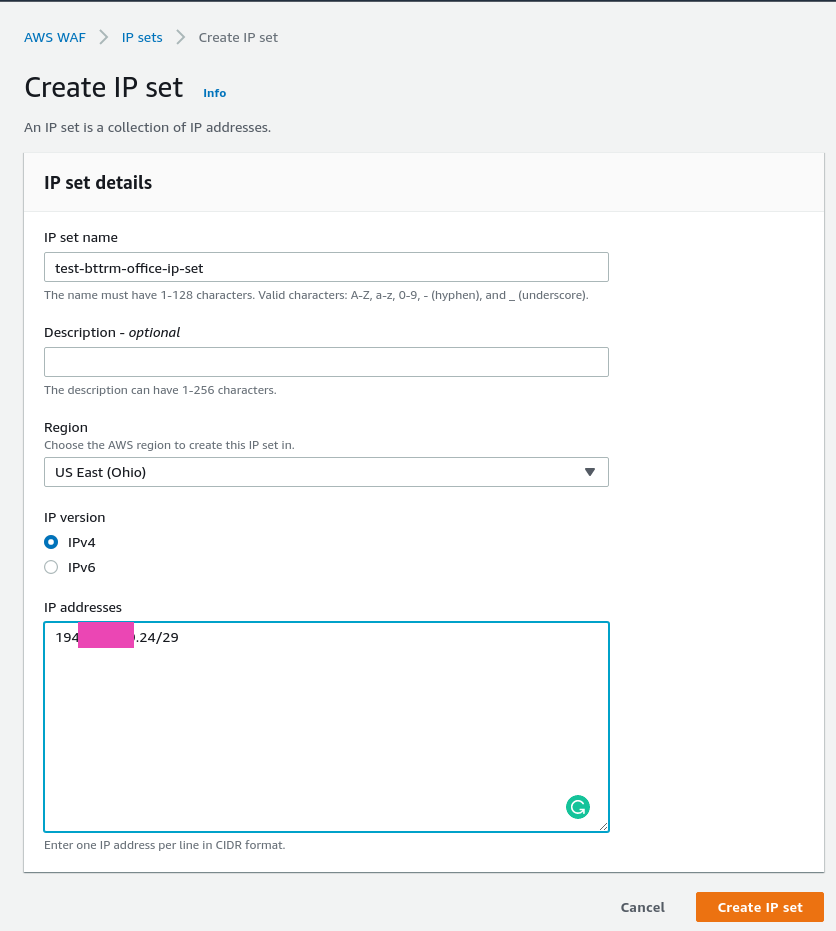 And now, let’s go to the Rules.

Select the ACL created above, click on the Add Rules, сhoose the Add my own rules:

Let’s add a simple rule: block all requests that originated from our office.

Choose the Rule type == IP Set as we will use the IP set created before, set the rule’s name, select your IP Set, use the Source IP address, and the default action – Block: 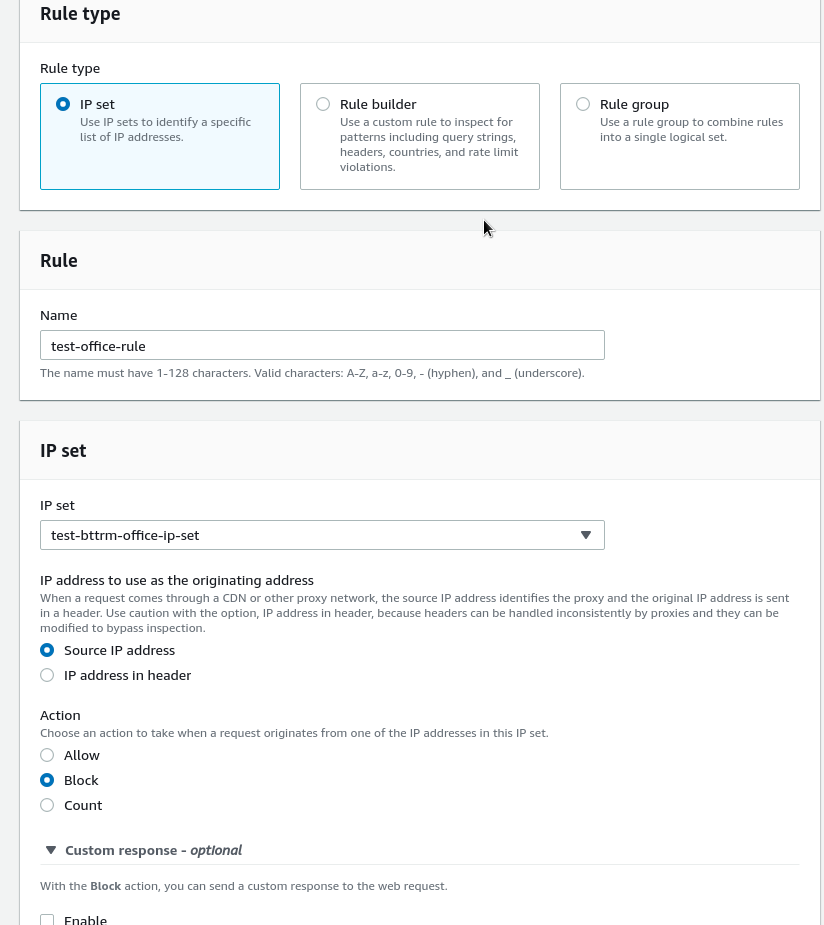 If set the action to the Count, WAF will just count requests that matched the rule without aby blocking activities. Can be used for testing before applying a rule:

And in a few seconds we will get the 403 responses:

Now, let’s try to make something more interesting: allow traffic only from the office, but block all other requests from the world.

As there is no way to create an IP Set with the 0.0.0.0/0 CIDR, so let’s make it in a different way: change the Default Action of the ACL to the Block, and use office’ IP set to the Allowed rule.

Check the access from something different than the office, for example from a server where is the rtfm.co.ua hosted. In 15-20 new settings will be applied: 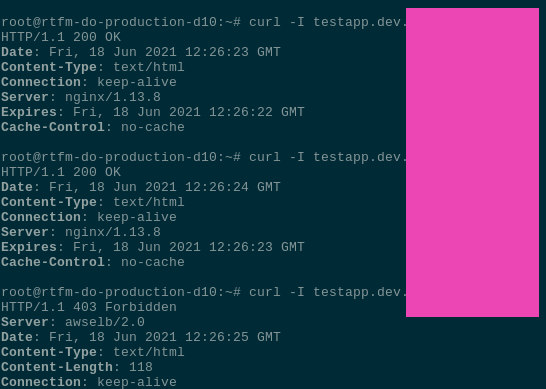 Go back to the ACL test-office-rule, and change Block to the Allow from the office: 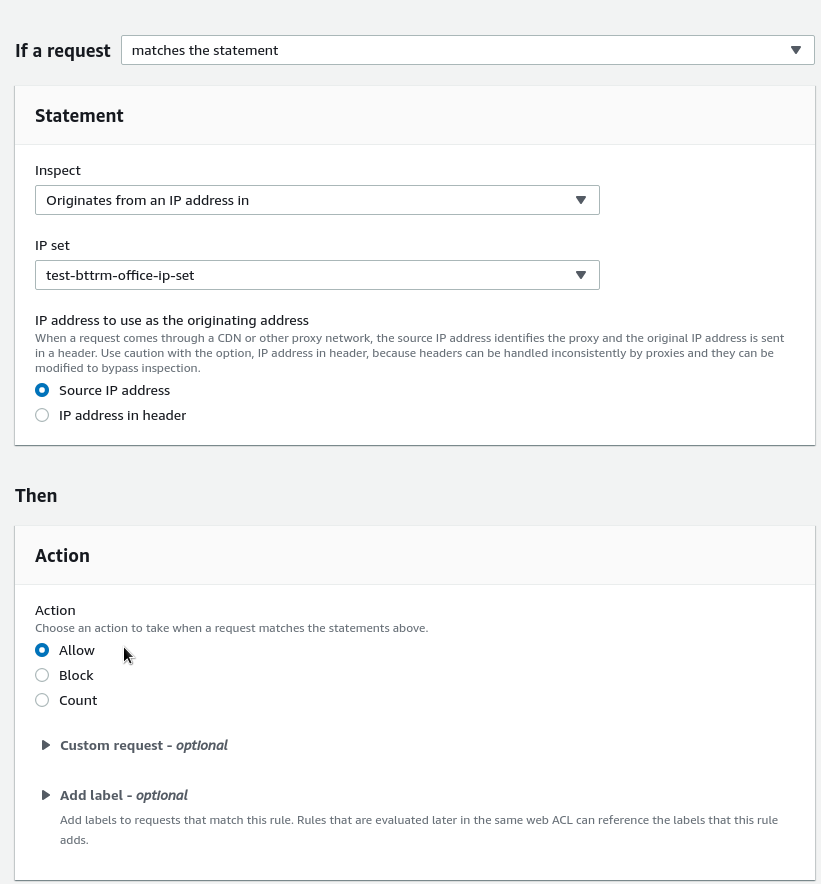 Check if it’s working now from the office: 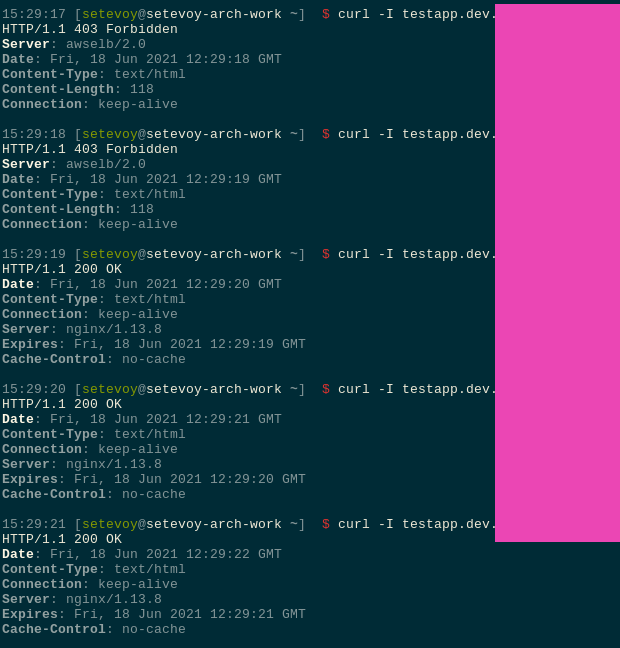 Okay, but what if we want to block public access only to a specific URI, let’s say /status, but allow its access from the office?

Go back to the default action of the ACL, and change it back to the Allow, thus allowing access to the ALB from anywhere:

Now, we need two additional rules: one to allow from the office, and one to block from the world. Let’s start with the blocking rule.

At this time, use the Rule builder, call the rule as block-status-uri-world, in the Statement choose the URI Path, set a value as /status, in the Action set the Block: 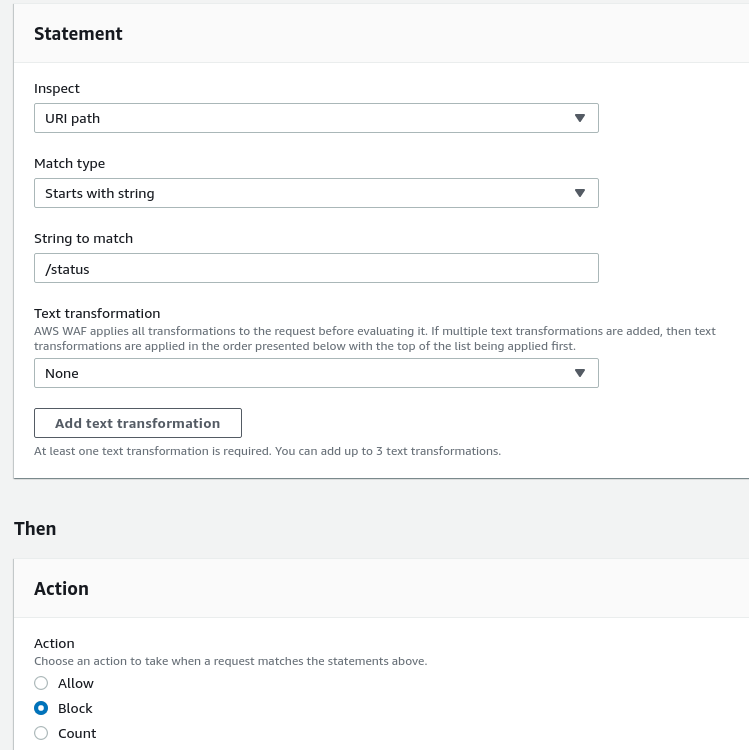 From the office to the /:

And from an another IP to the /:

From the office to the /status:

And from the world:

Go back to the Rules, and add another rule, let’s call it allow-status-uri-office: 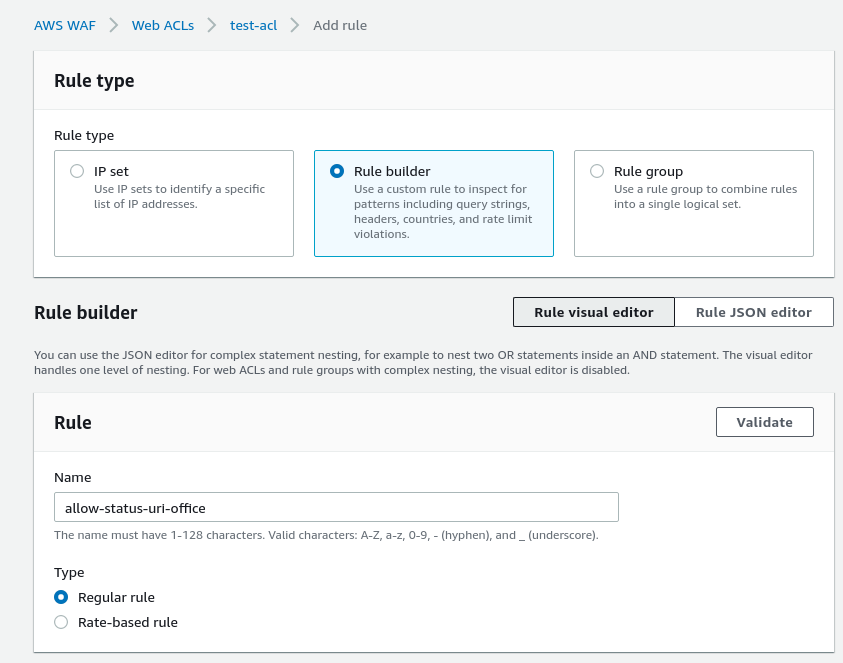 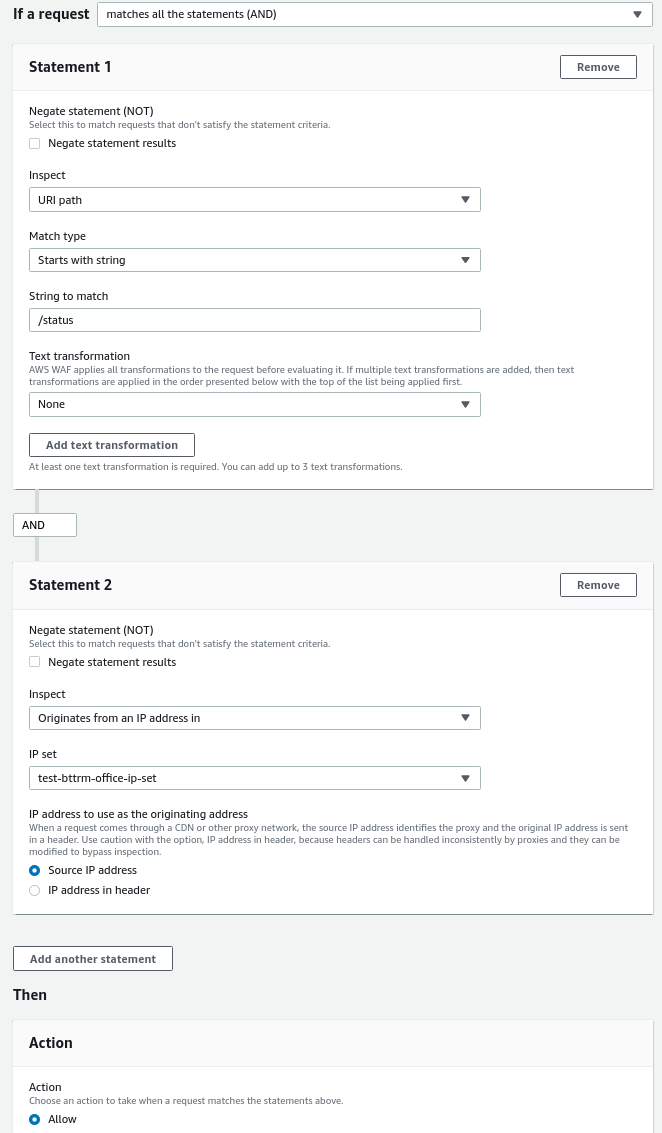 By the way, pay attention to the Capacity field: here we can see how many WCUs will be consumed by the rule from the total 1500 available for us in the ACL.

So, we’ve added an allow rule, but now it will not work as we have the first rule block-status-uri-world, and it will block all requests to the /status, even from the office:

To fix this, move the allow-status-uri-office to the beginning of the list:

So now priorities will be the next:

Good, it was blocked. Now, from the office:

One of the nastiest types of attacks is SQL injection which definitely worth being banned.

In the AWS WAF Managed rules we have a list of predefined rules from the AWS itself and its partners, and also you can create such a block on your own. 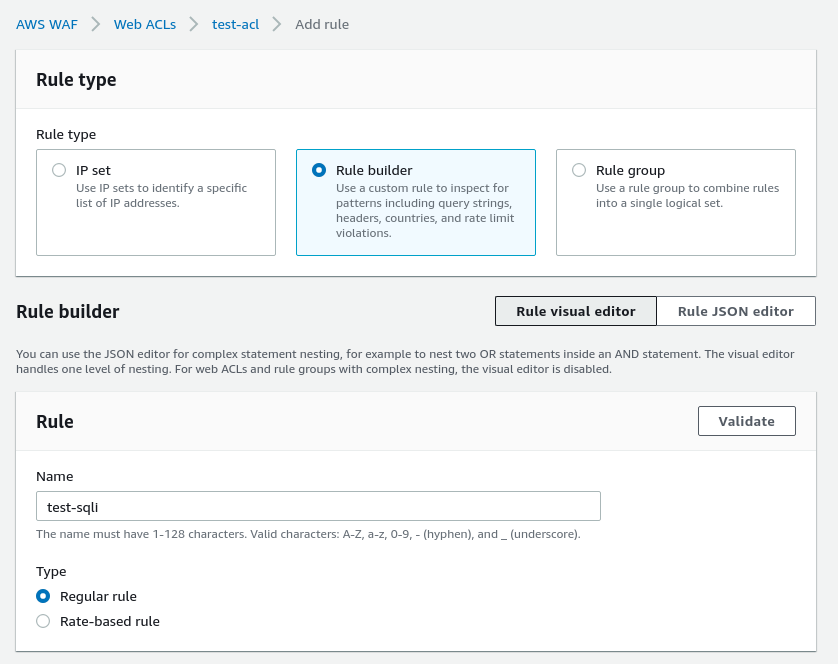 In the Actions leave the default Block, and in the Custom response let’s set the 405 – Method not allowed, to confuse an attacker (although it might be even more fun to set the 200 here 🙂 ): 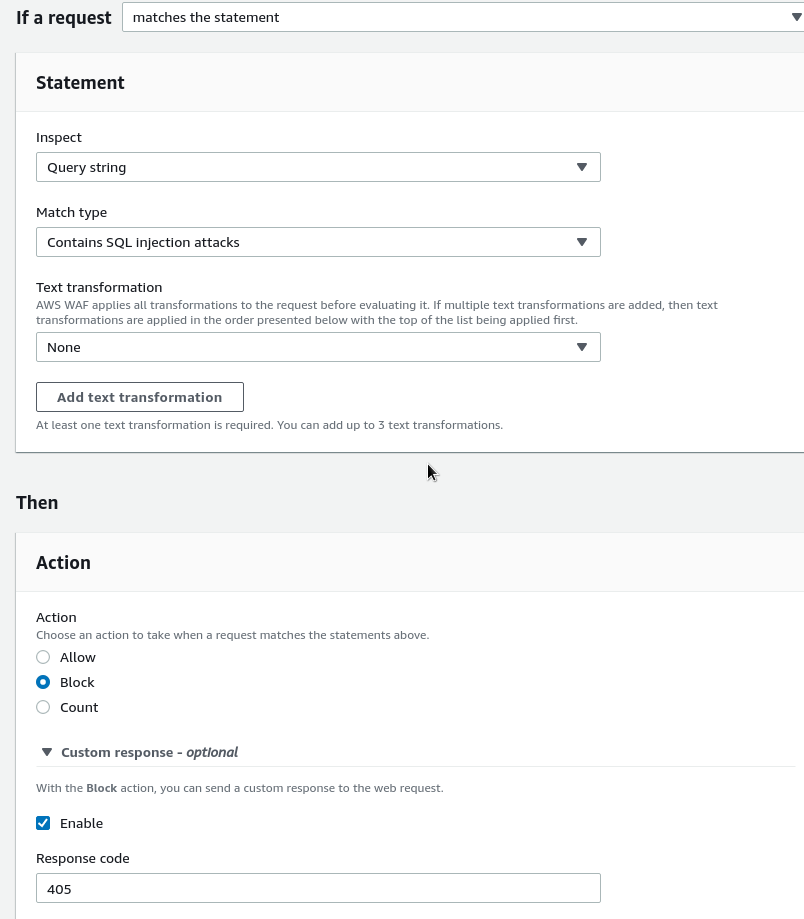 Save the rule, and check it with a request products?category=Gifts'-- googled in here:

Yay! We’ve blocked an SQL injection attempt to our application!

Let’s take a look at what AWS and its partners suggest to use in their existing rules. 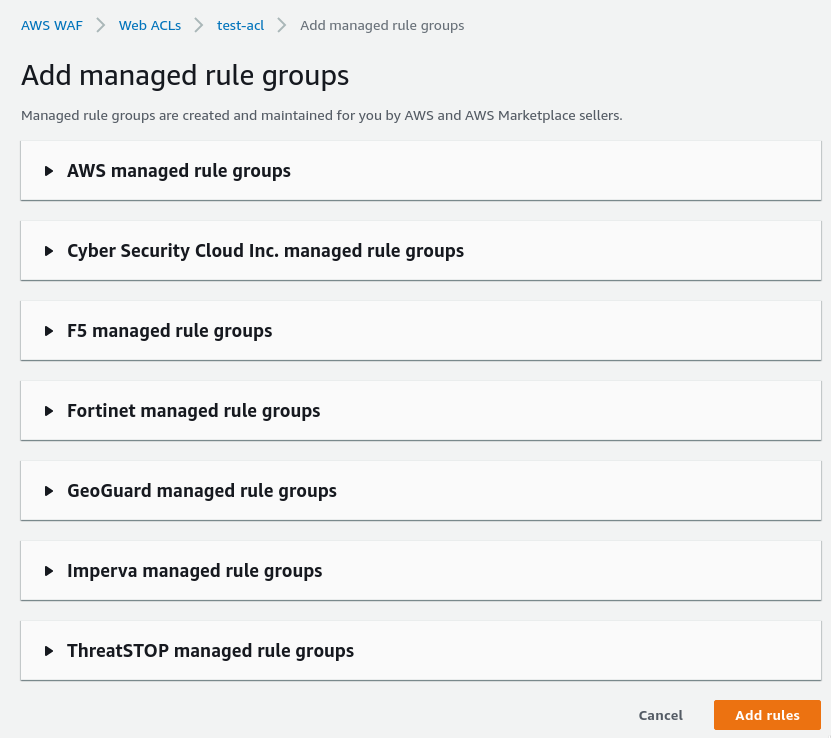 In the AWS managed rule groups you can find a list of rules from the AWS, and the rest is paid rules that can be purchased on the AWS Marketplace.

For example, the Known bad inputs rule will inspect the Host header of a request, and if it contains localhost, then such a request from the Internet will be blocked as a valid request can not contain it.

Add it to the ACL:

Also, here you can configure a default action for the group, or add a filter to select only some of the requests: 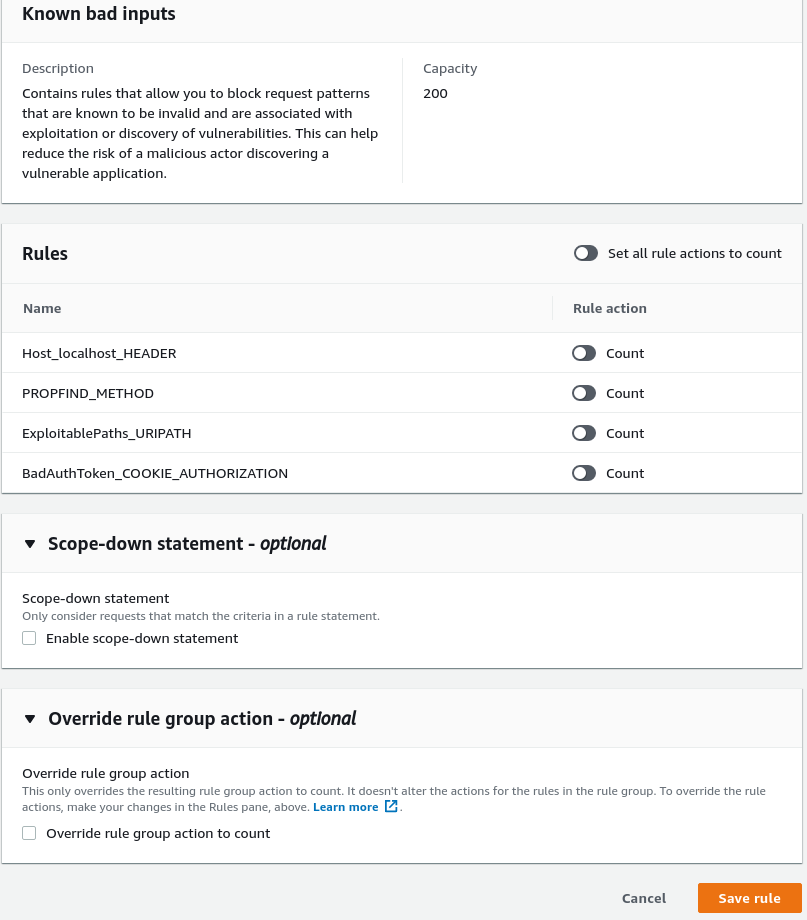 And again – pay attention to the Capacity, as this group will use the whole 200 WCUs from the 1500 limit of an ACL. 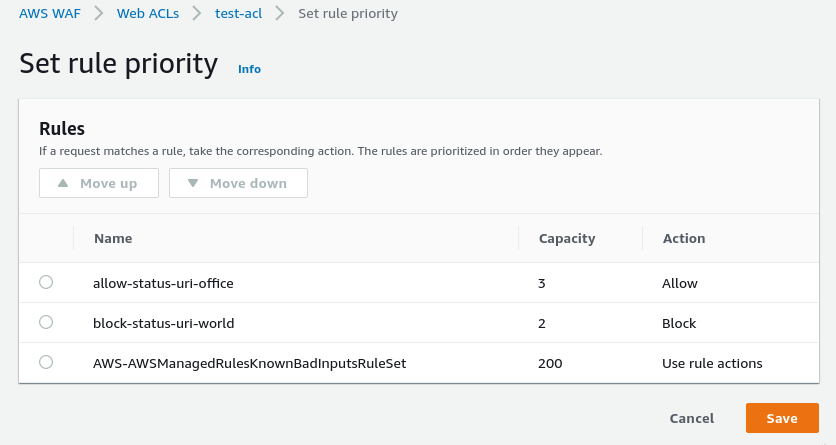 And add the non-valid value for the Host header – localhost:

Rule groups and an ACL deletion

To save your own rules persistently, use the Rule groups:

Then, create your rules in a Group, and attach this Group to your ACL.

From the main, as forme:

Okay, so we’ve seen how to block requests, created an ACL, tested it. All works.

But it’s good to monitor its activities, and even send alerts when something goes weird.

The very first place where we can go is CloudWatch and WAFV2 metrics: 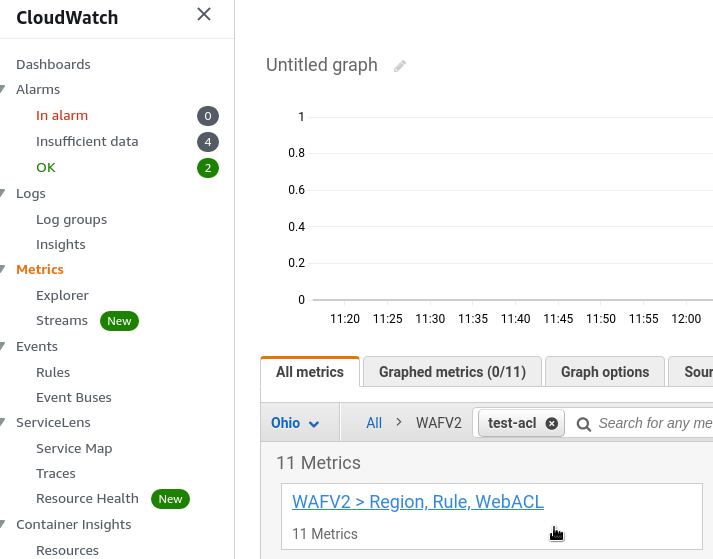 Choose our ACL here or a specific rule:

Here are our blocked requests.

Next, we can collect them to a Prometheus instance with the cloudwatch-exporter:

Run our test requests with SQL injection, or even run it in a loop:

while true; do curl -I "http://testapp.dev.example.com/products?category=Gifts'--"; sleep 1; done

Check graphs in the Prometheus:

And now we can see blocked requests here too.

Let’s add a test alert: check an average increase per second for the aws_wafv2_blocked_requests_sum metric during last 5 minutes:

If its value will be greater than zero, then WAF blocked someone, and we will be notified about it:

To log WAF activity, we need to have an AWS S3 bucket, and an AWS Kinesis Data Firehose delivery stream.

Go to the Kinesis, create a new Data Firehouse stream:

Its name must be started with the aws-waf-logs- prefix, also set the Direct PUT or other sources, and click Next: 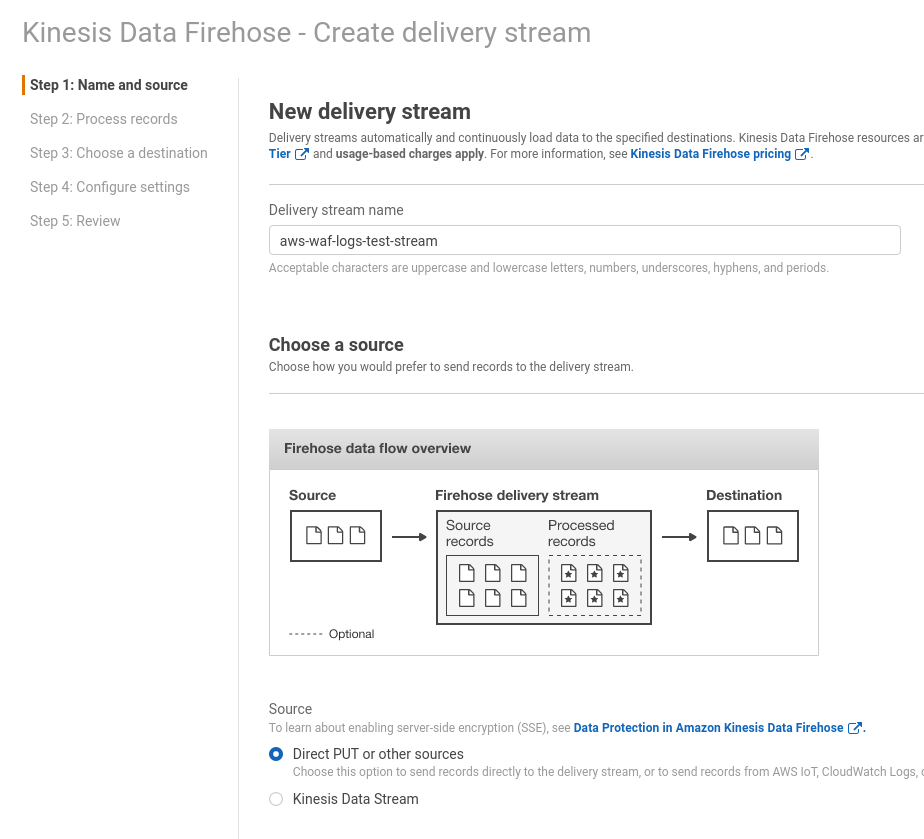 Skip everything on the following page, on the next page for the Destination select S3, chose existing, or create a new S3 bucket: 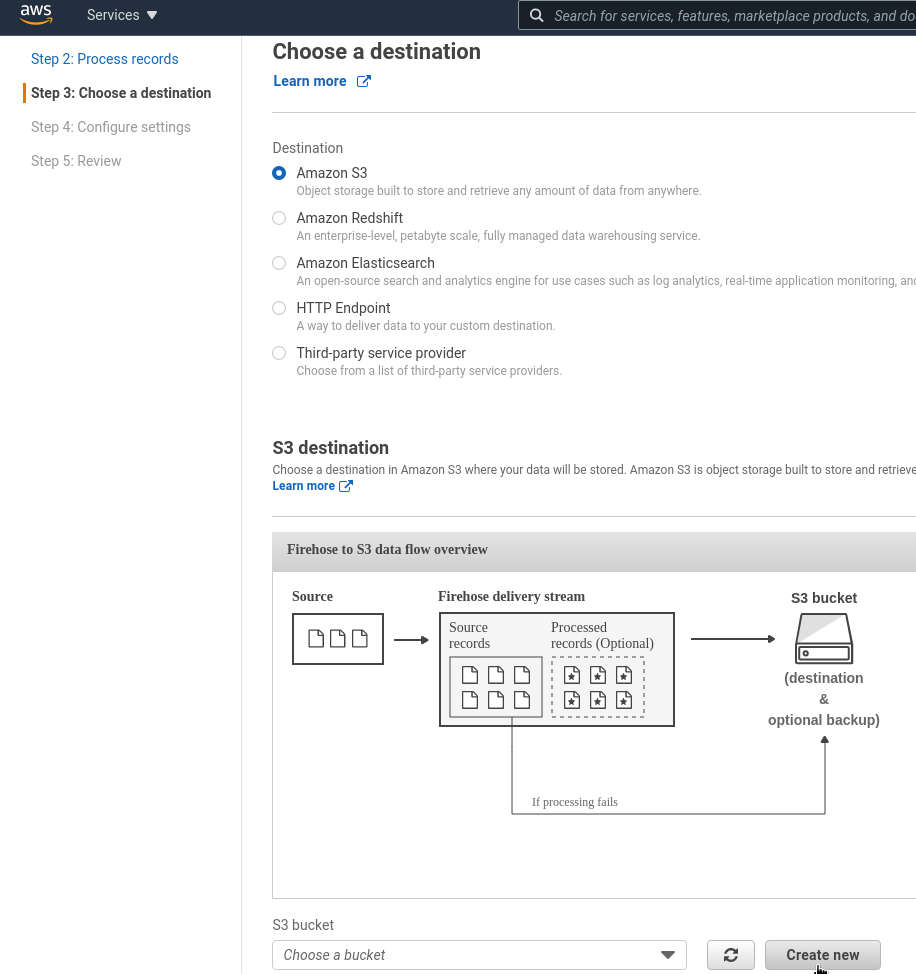 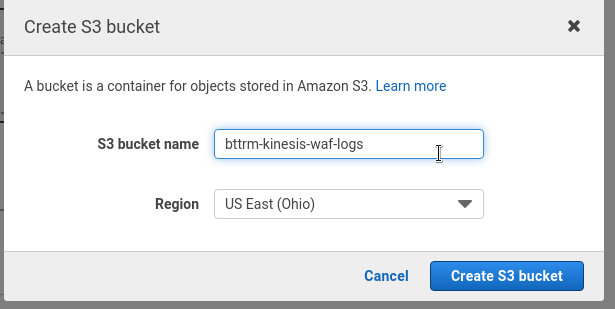 Here, you also can set a prefix to keep logs from various ACLs in the same S3 bucket: 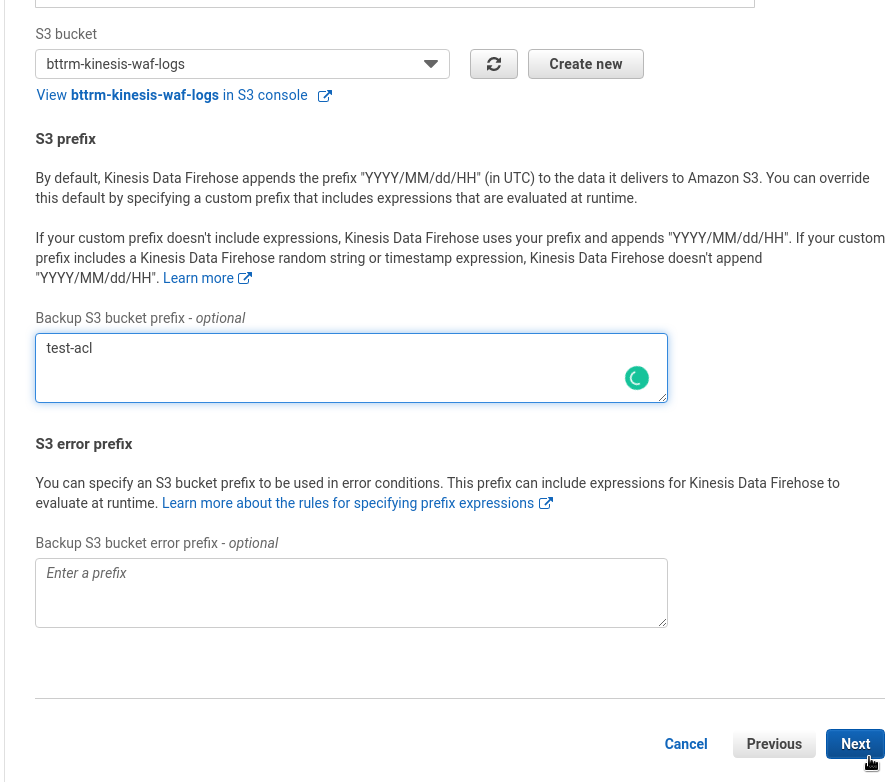 On the next page, for now, can leave everything with default values: 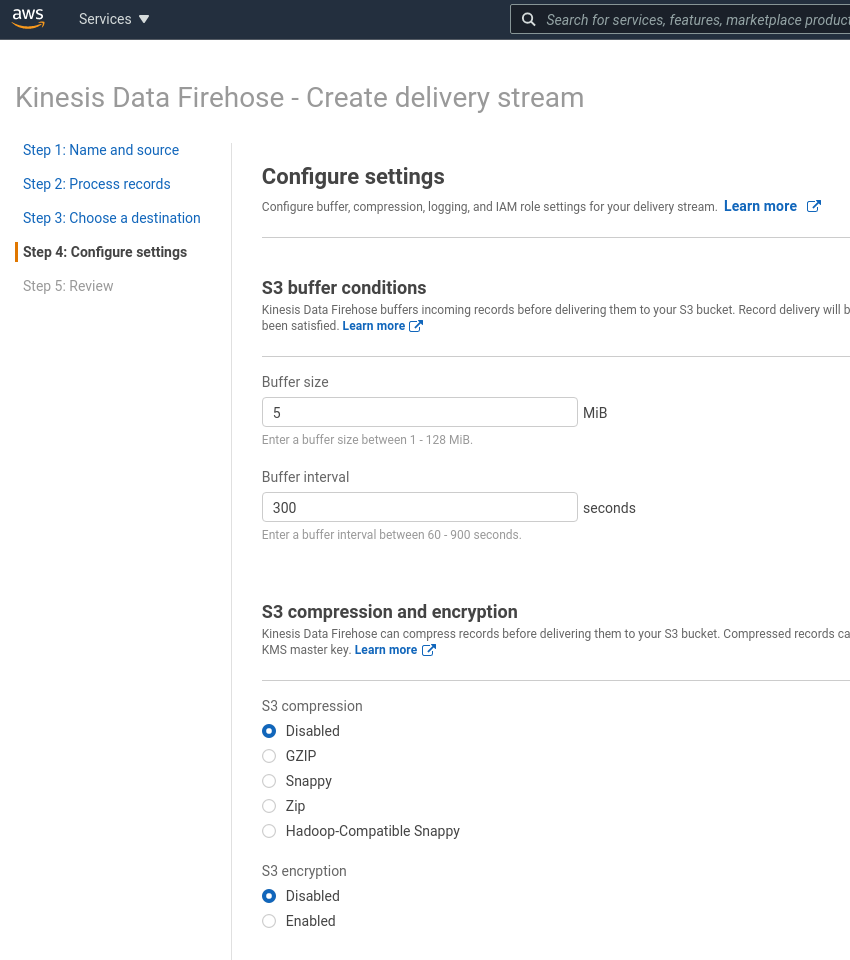 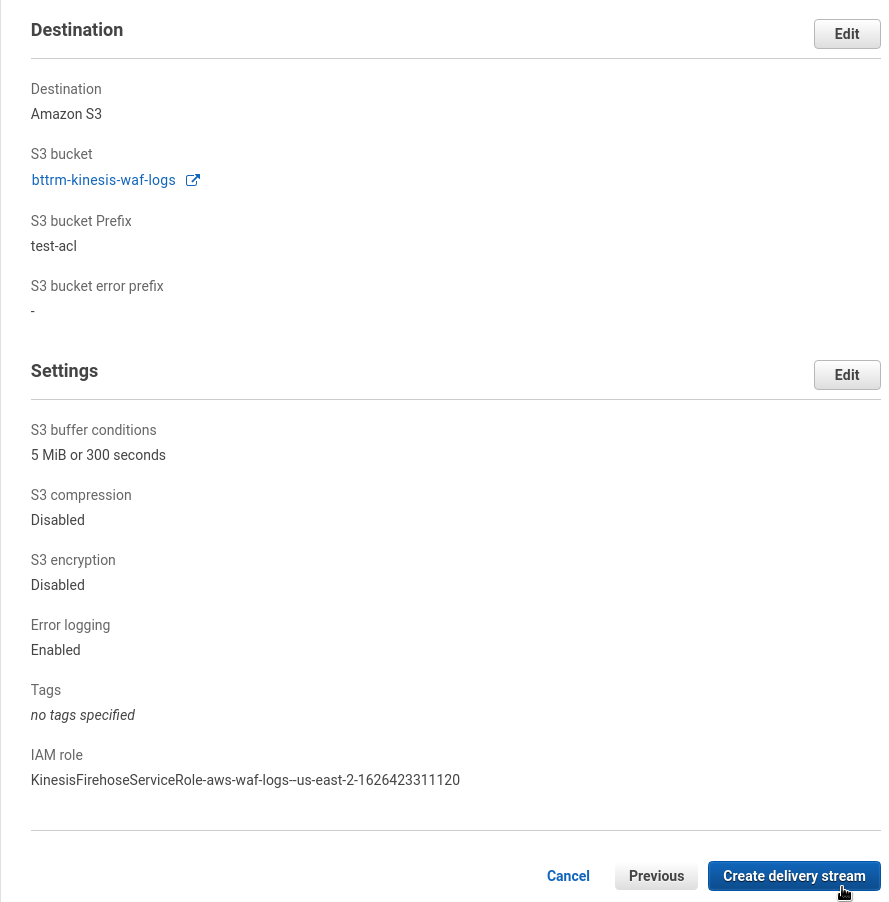 Go back to the WAF ACL to the Logging and metrics tab, click on the Enable logging:

Select the stream you created above, optionally configure filters for fields: 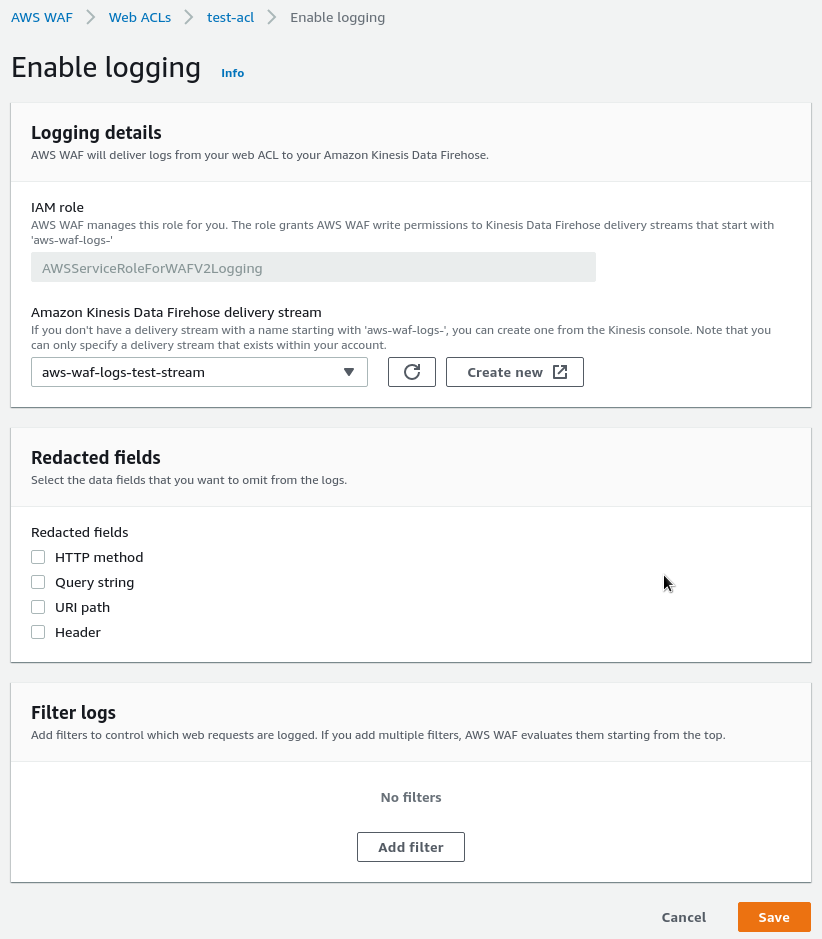 Wait for 5-10 minutes, and you’ll get your logs delivered to the bucket:

Now, you can collect them to services like Logz.io, see Configure Logz.io to fetch logs from an S3 bucket.

CloudWatch Logs isn’t supported yet, but it’s planned to be added.

And we need to attach this ACL to an ALB, created from a Kubernetes Ingress with the AWS Load Balancer Controller.

To do so, we can use its alb.ingress.kubernetes.io/wafv2-acl-arn.

Enable ARNs display for your ACLs: