So, this seems to be the last one post in the whole series about passwords and SSH management in Linux.

The previous parts were about:

Actually, knowing all of this we can grab them all together and configure normal secrets management on a work laptop with Arch Linux and Openbox DE.

I’ll use KeePassXC instead of the KeePass.

In fact, from the very beginning, I switched to the KeePassXC just because by default it looks much better in Linux with Openbox. 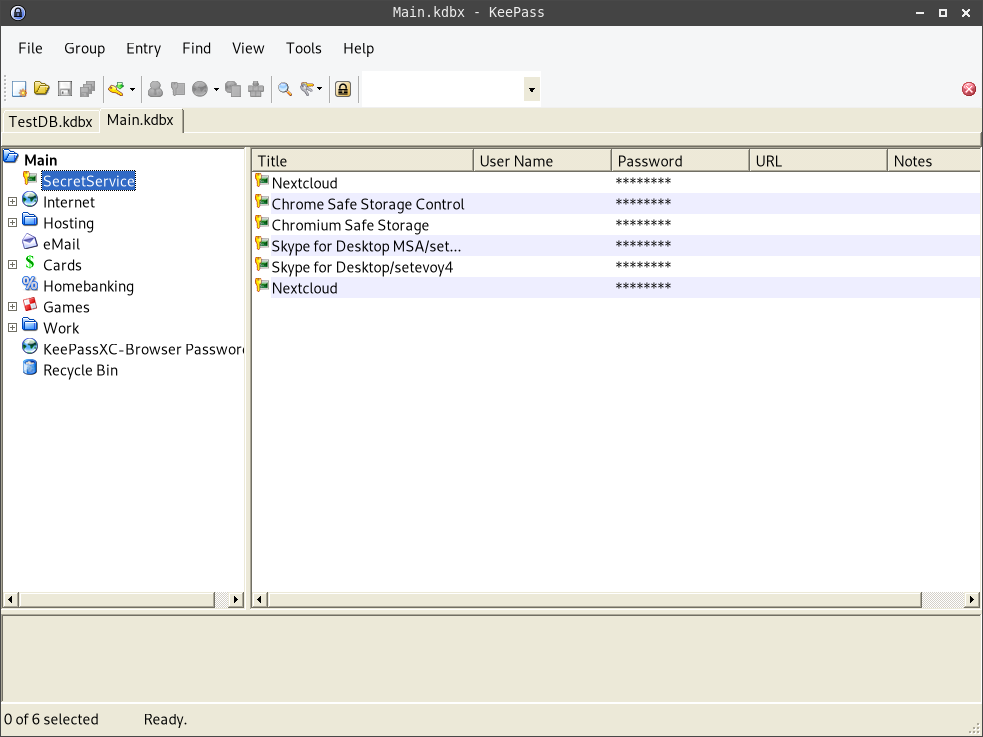 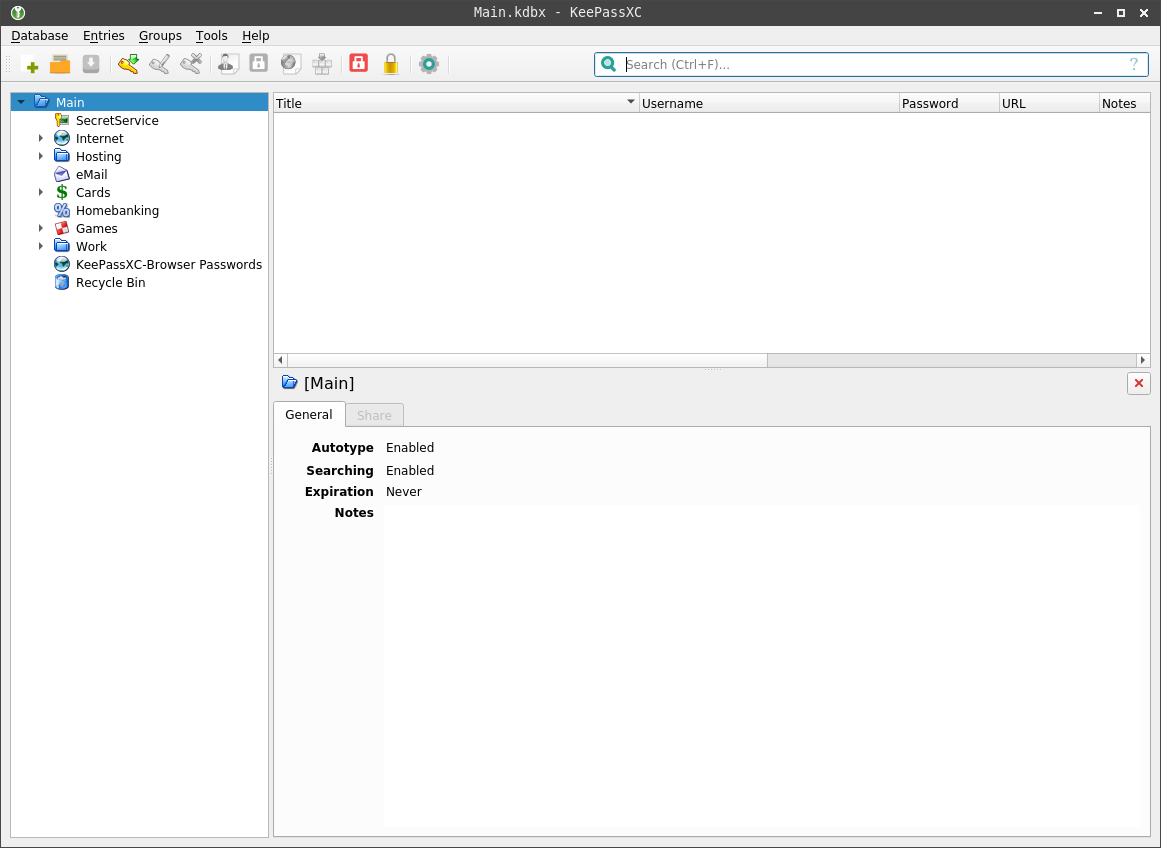 Also, KeePass is written in C# from Microsoft and under Linux requires mono to work, while KeePassXC is written in C++ (see its repository) and work in easy on any platform – Linux/BSD/macOS/Windows.

Take a look at the thread on Reddit for more details.

As a browser, I’ll use Brave based on the Chromium so there will no difference in a configuration.

KeePass and a browser’s passwords – KeePassXC-Browser

At first, there is a good question – do you really want to switch passwords storage for your browser?

I.e, you have Chromium, it has its own SQLite database, passwords stored there in an encrypted way.

Furthermore, Chromium has no issue with founding credential fields on webpages, but this happens sometimes with KeePass.

On the other hand, when using KeePass – all your passwords (and SSH keys, etc) are always with you, in the same place. Easy to backup/restore, move/share between computers, add to another browser and so on.

So, everybody will decide this himself, but let’s write the KeePass and Chromium integration process.

Go to the Tools > Settings, then to the Browser Integration, enable it: 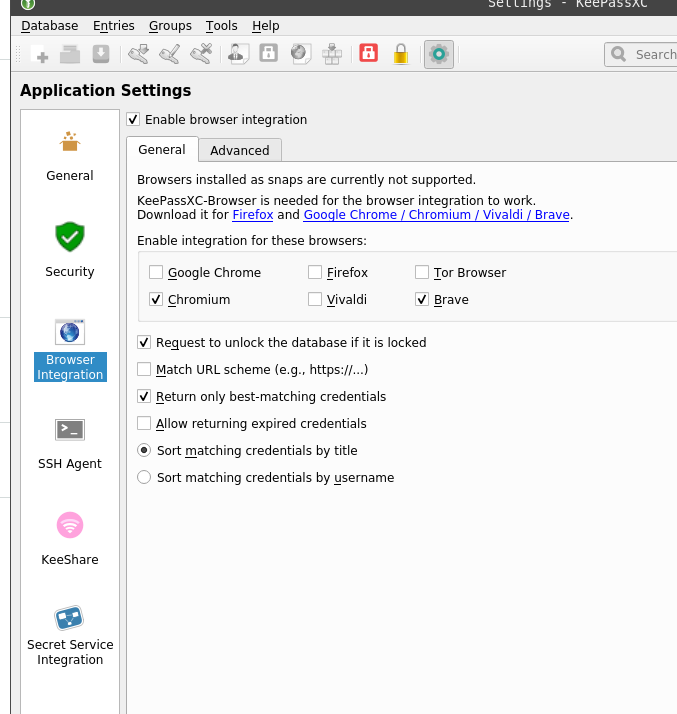 Find the KeePassXC-Browser plugin, install it: 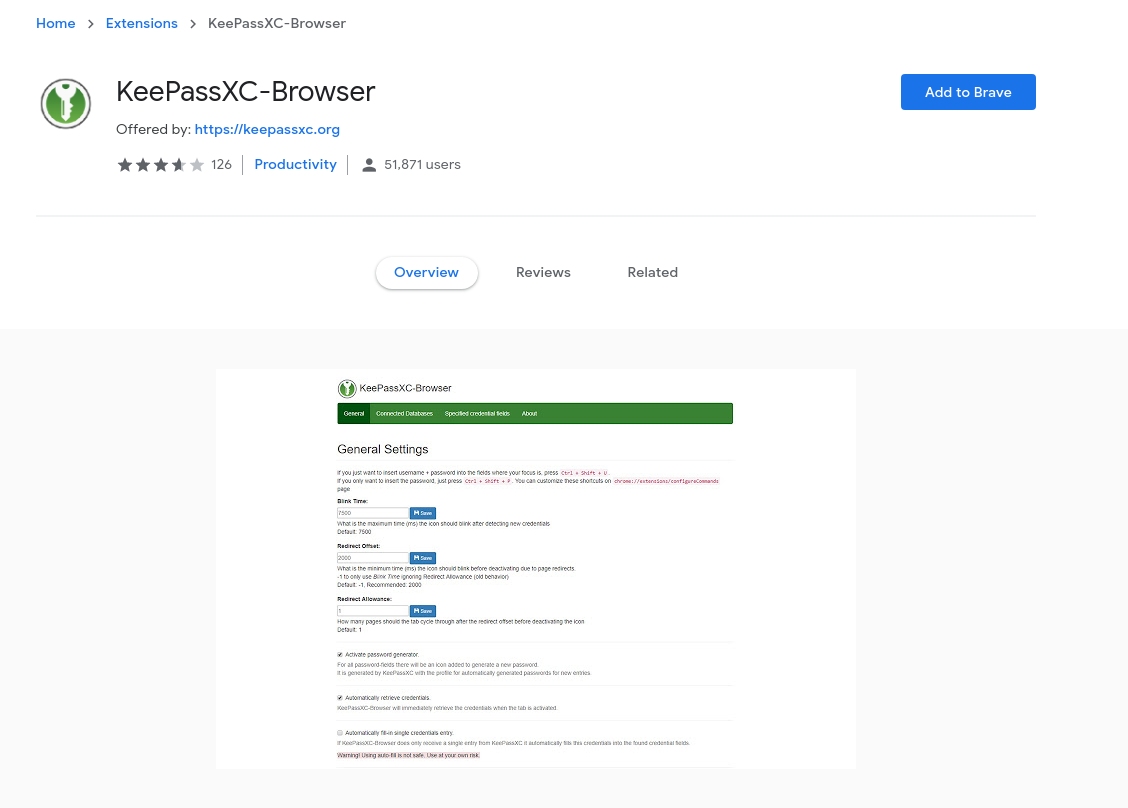 Go to the Settings: 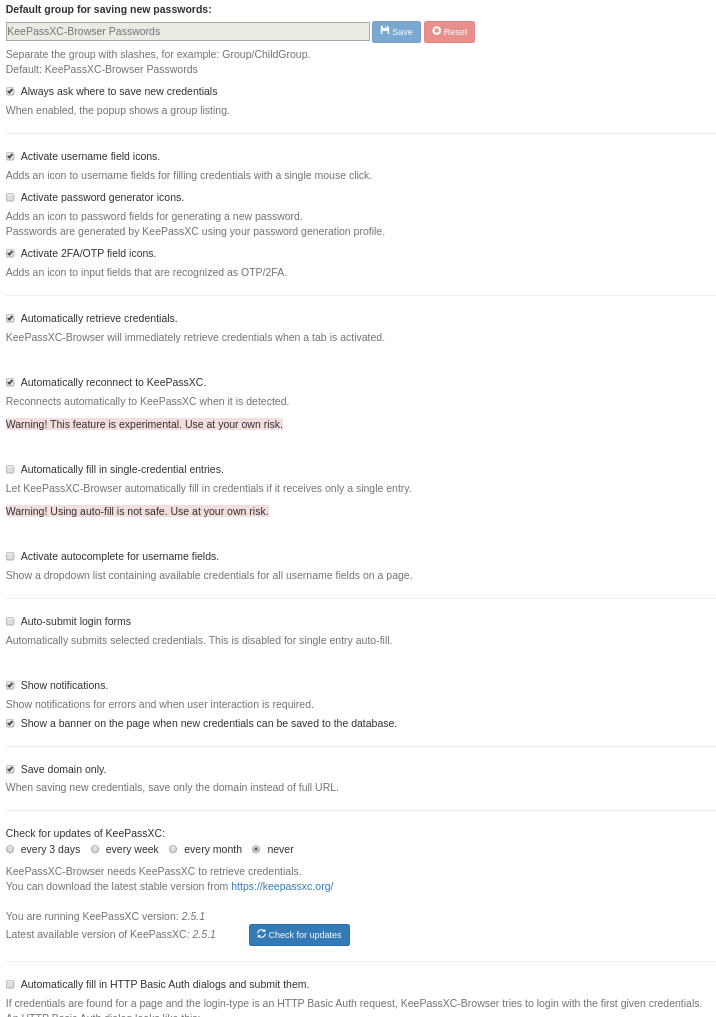 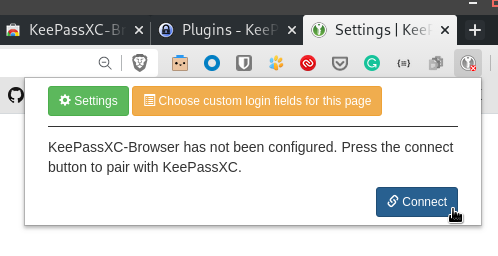 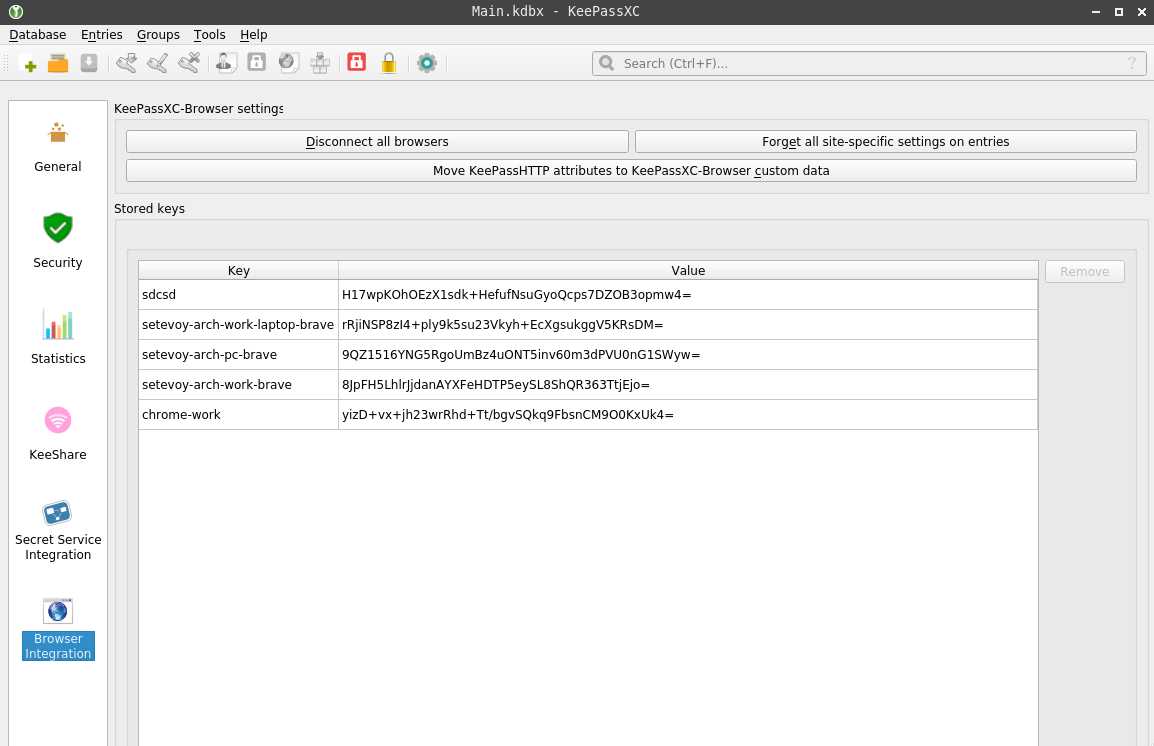 And it’s done – the icon is green now: 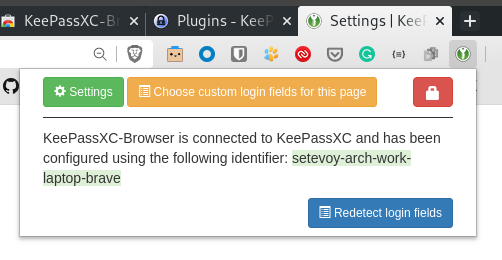 Save it (New), log in again – and our credentials are here now: 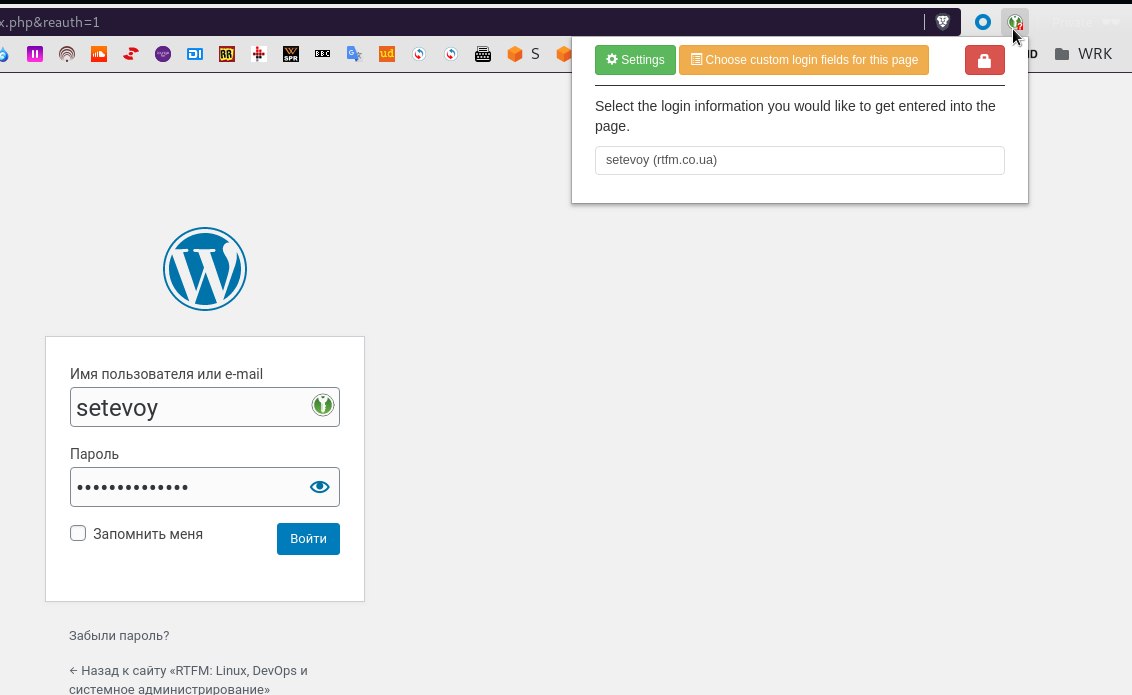 One more interesting thing – TOTP codes generator in the KeePassXC.

Still, there is a serious question: is it a good solution to enable it?

The main idea behind the MFA authentication is exactly to use two separate services to authenticate you, i.e. login:password from the one side, and a TOTP-code from your MFA on another.

Is it worth to keep them together in the same KeePass database – absolutely about you, but keep in mind that if somebody will get access to your KeePass – then you’ll have no chance for the MFA as the last hope to keep your data secure.

Still, such an option is present, I’m using MFA, so let’s take a look at how to configure it.

During an MFA configuration – chose something like “Show secret key” or “Can’t scan QR“, depending on a service, to see a text code instead of QR code.

Here is an example from the AWS Console: 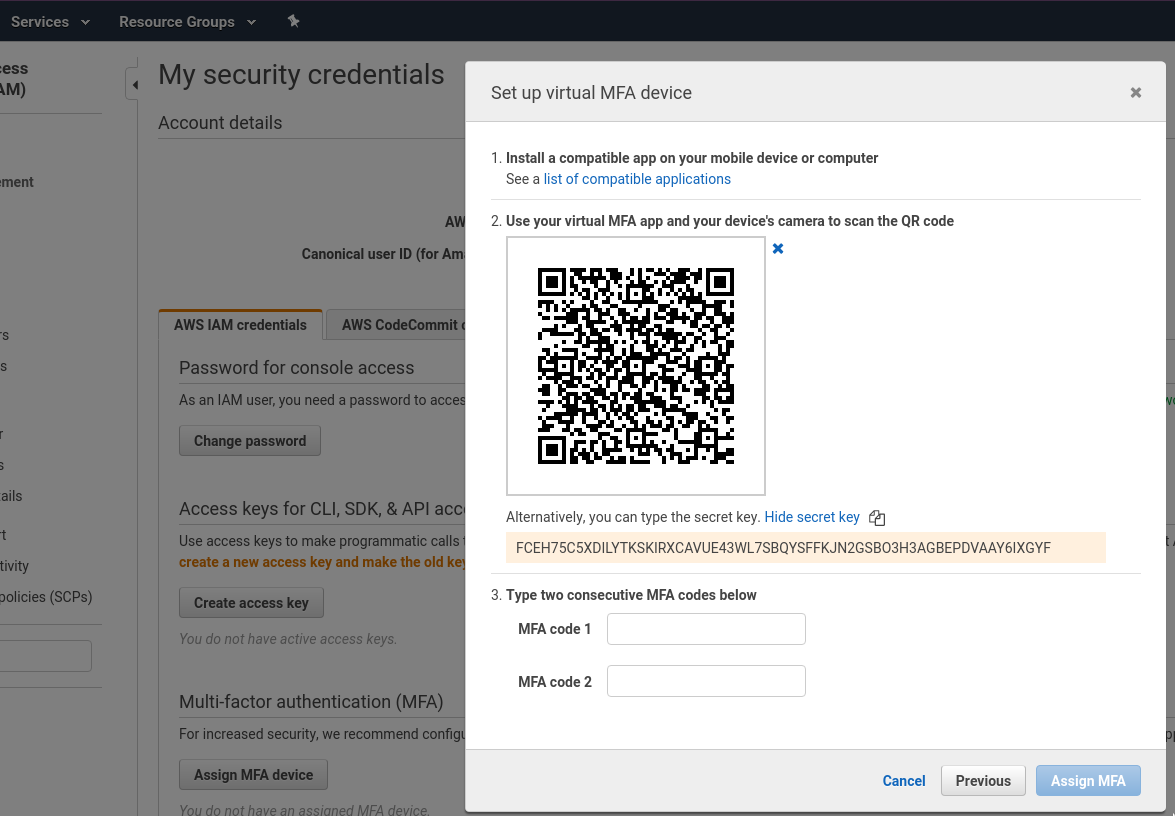 Save the code, then in your KeePassXC find or update an entry you’d like to configure MFA for, right-click on it – TOTP > Set up TOTP:

And set the Secret Key from AWS: 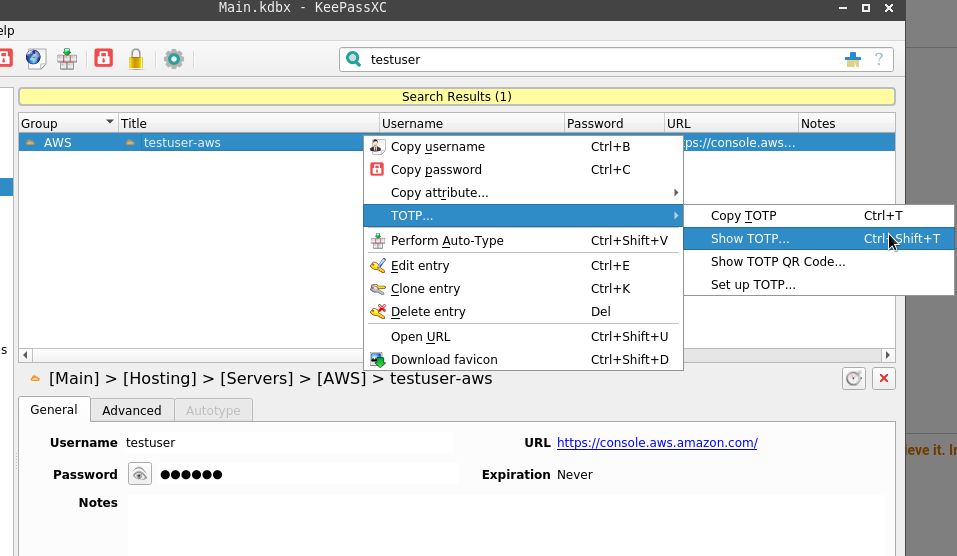 And finish MFA configuration in AWS: 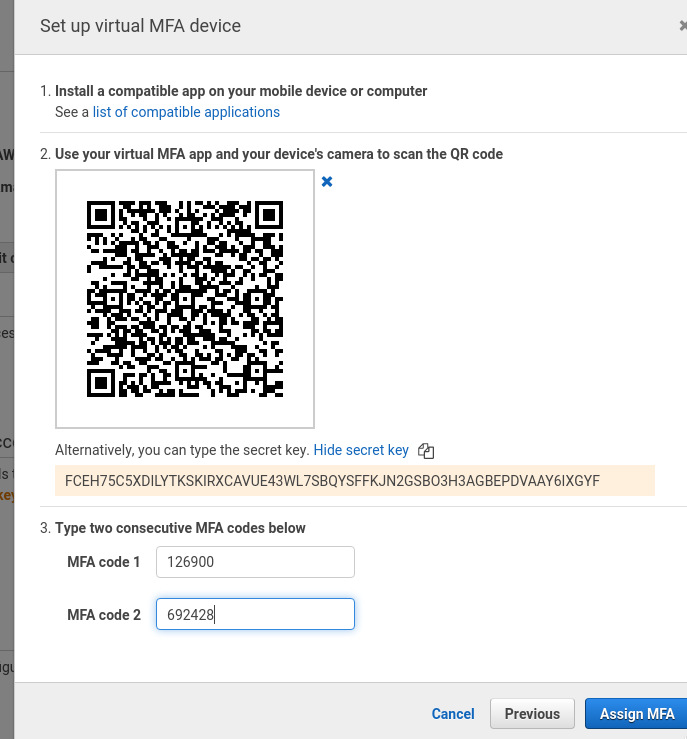 Try to log in, but… The button to fill up the TOTP field doesn’t works 🙁 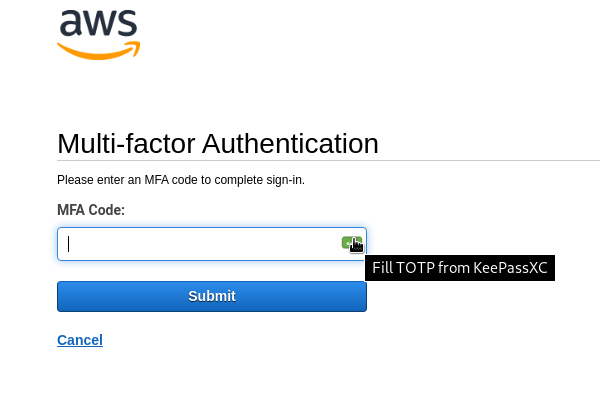 And it didn’t work in Chromium for Gmail too.

Well – the code in the KeePass is generated, so just manually copy it by right click or by using Ctrl+T – and we are done here.

The idea here is to store SSH keys passwords in the KeePass, and access them via ssh-agent without being asked for a SSH-key password.

It is already described in more details in the Linux: KeePass, SSH и хранение паролей RSA-ключей post, but it’s available in Russin only at this moment (will translate it in next couple of days).

Check if ssh-agent is running:

Check if the $SSH_AUTH_SOCK variable is available, as it will point to a socket used for communication with the agent: 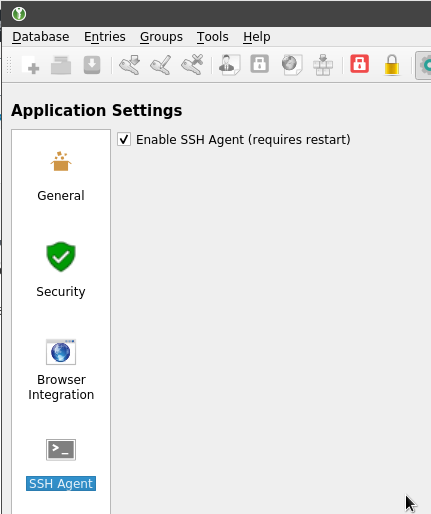 Pay attention that here is the -f used to set a key-file and it is not in the .ssh directory to make it simpler to add to the KeePass.

Go back to the KeePass, create a new entry, set any name, and set your key’s password in the Password field: 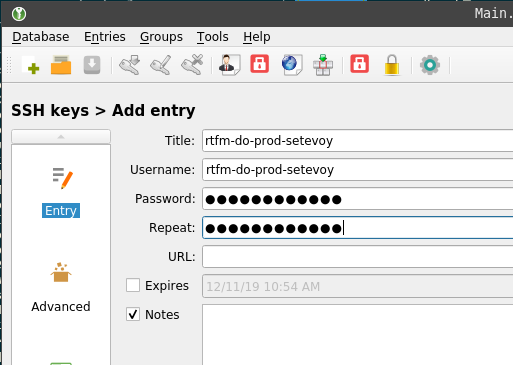 In the SSH Agent, a key can be added as Attachment, or as External file.

I’d suggest using Attachment as in this case the key will be stored in the database directly, and you’ll not need to copy it over your working/home/etc laptops.

In the same window switch to the Advanced, tab and attach the key file: 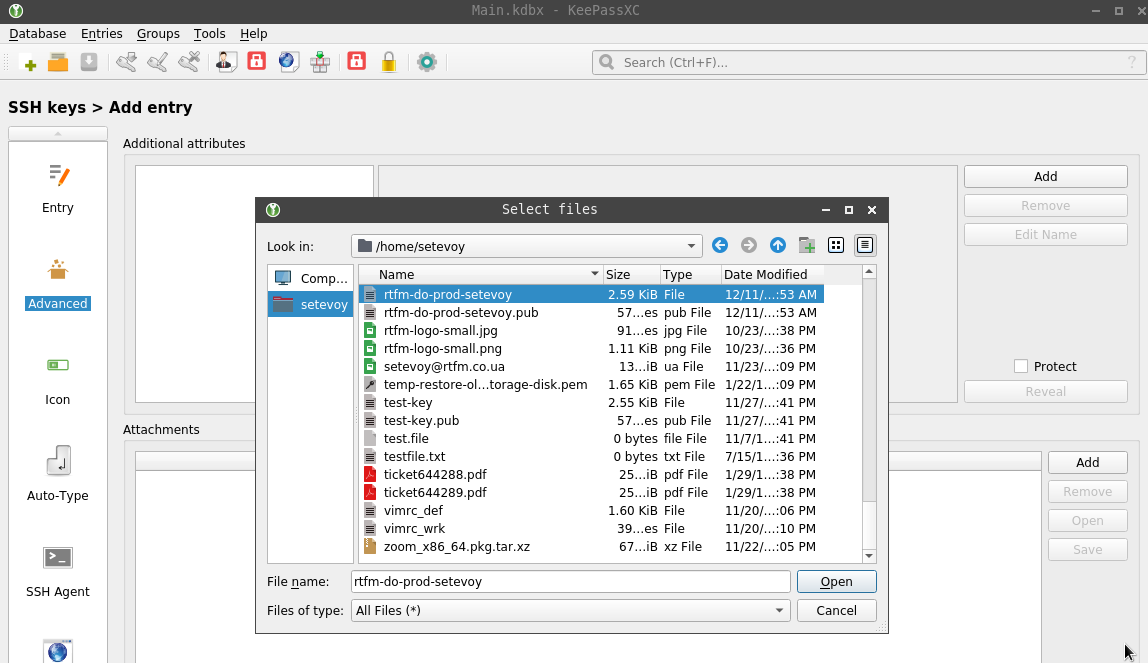 Go to the SSH Agent, add the key from the Attachment: 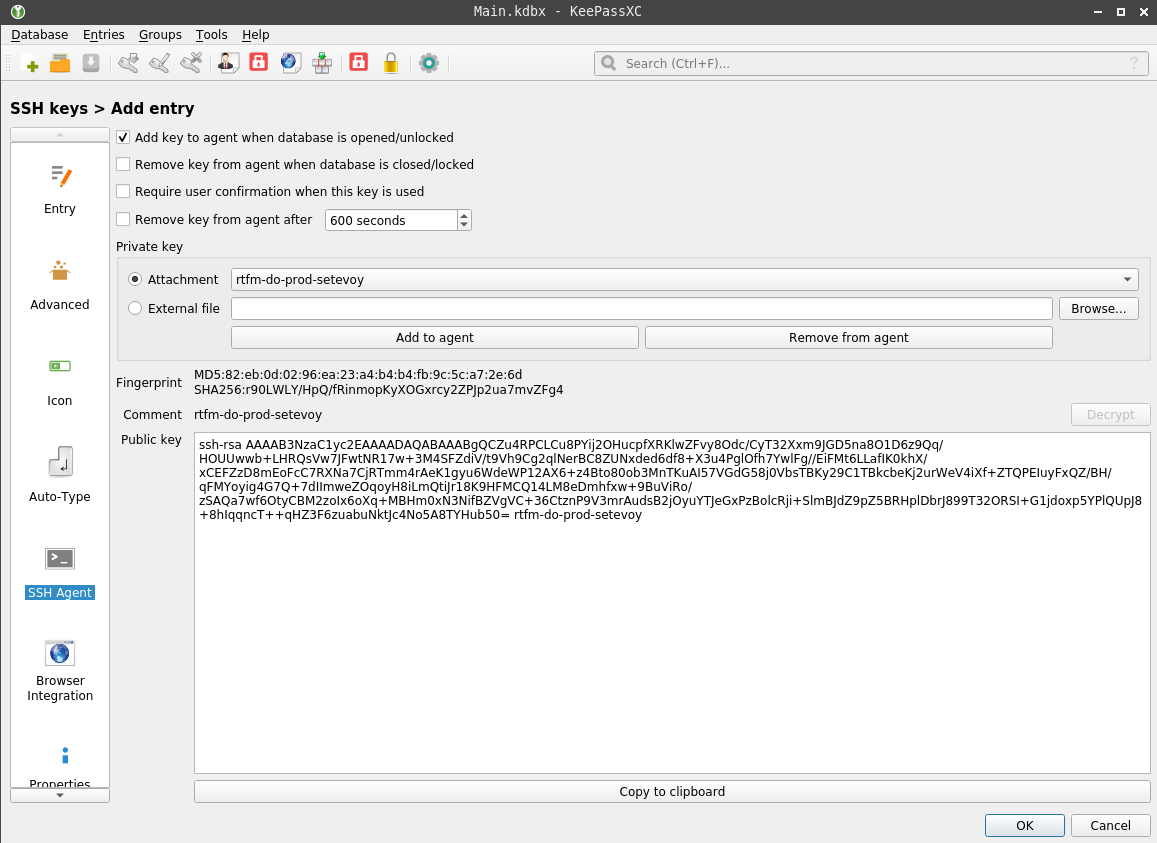 Here, pay attention to the Add key to agent when database is opened/unlocked option – worth to enable it only for keys that are used often and best to keep them less than 5, because when ssh-agent will try to connect to a host – it will try to use every key accessible in the ssh-agent, and SSH server on a remote host can close connection to “prevent a brute-force”.

Okay, try to connect to a host:

Remember, that using this approach ssh-agent must be started beforehand of the KeePass and must export its $SSH_AUTH_SOCK variable in such a way, so KeePass can see it. Check options in the Running ssh-agent with multitype terminals.

I’m using the variant with the systemd service and the socket path will be exported via the ~/.config/openbox/environment file (as I’m using Openbox DE).

The last step just for a bit of comfort – add a “short-name” for the connection to the ~/.ssh/config:

We are not adding IdentityFile at all – ssh-client will ask for ssh-agent about available keys to try to log in, so we are not tied to a key-file on the disk.

Passwords were asked neither for the user nor for the key – everything is working, as expected.

A short side-note: if you’ll enable the “Require user confirmation when this key is used” option now: 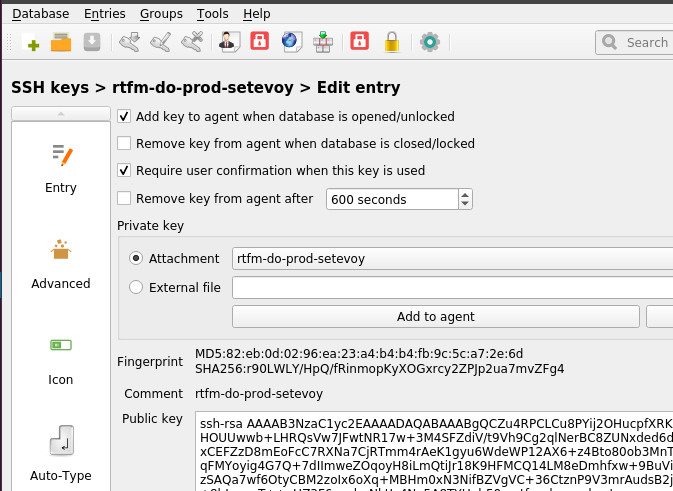 Then during SSH logging in process, sometimes you can see the “sign_and_send_pubkey: signing failed: agent refused operation” error:

It happens because ssh-agent trying to ask a user for confirmation and uses the ssh-askpass utility which can be not installed in  a system:

Re-try log in – and now you must see such a window with confirmation request:

For a better understanding of keyrings in general and the Secret Service in particular cases – I’d strongly recommend you first to read the What is: Linux keyring, gnome-keyring, Secret Service, and D-Bus post.

At a first, let’s make sure we have no Secret Service available in our system – check the D-Bus:

Go to the KeePass, Tools > Settings, choose the Secret Service Integration, enable it: 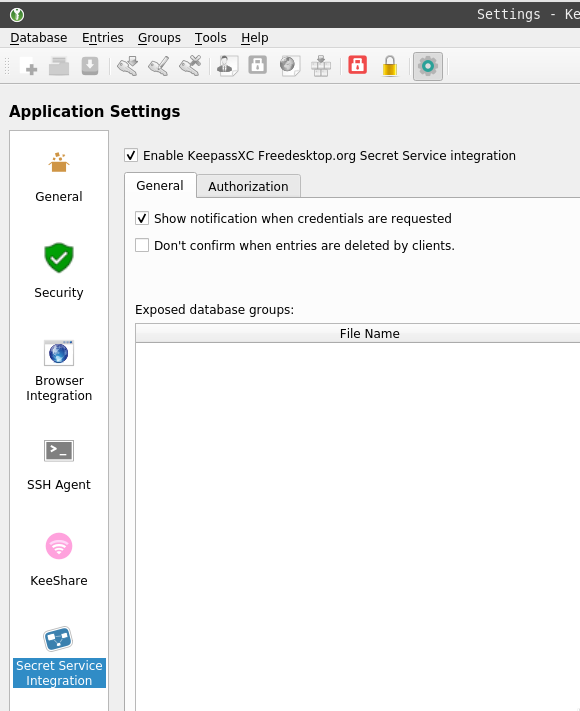 Now, go to the KeePass database’s settings, and in its Secret Service Integration settings specify a collection (team, folder) which will be used to store our secrets: 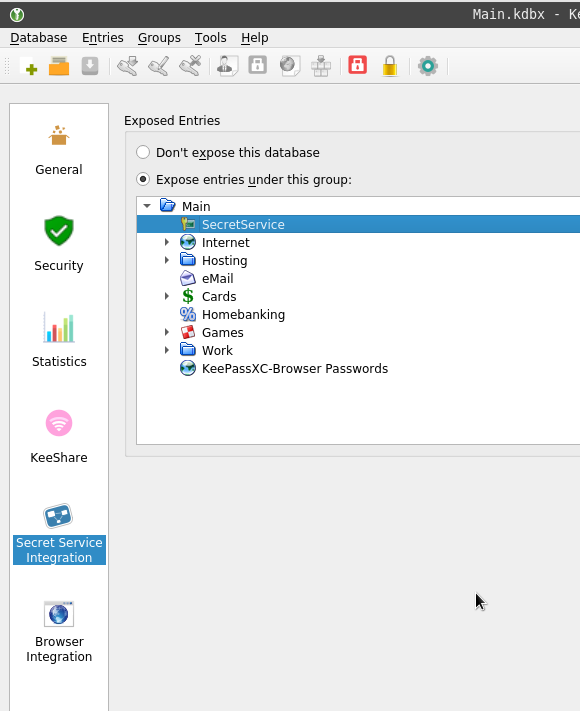 Also, it’s a good idea now to start KeePass beforehand every other application in the system.

In my case, this can be done with the ~/.config/openbox/autostart file:

And in the KeePass’ Tools > Settings check services which are using Secret Service now: 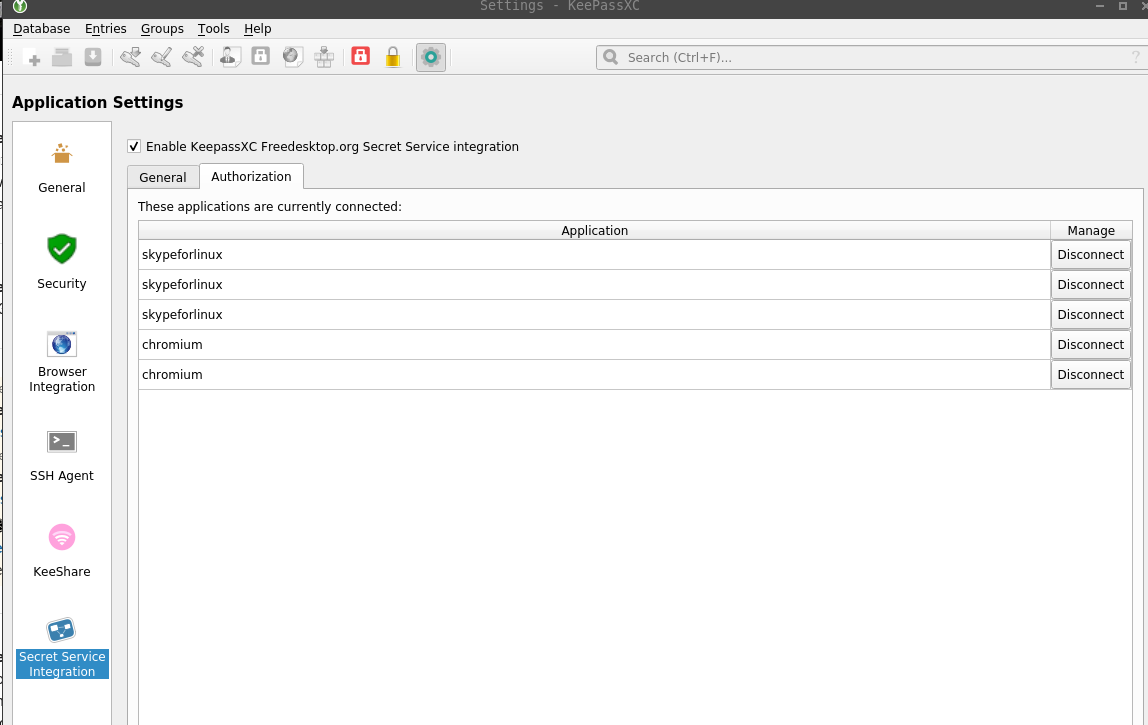 A notification from the KeePass when Chromium tries to access its password to decrypt some passwords in its SQLite database:

To salve it – read the Arch Wiki and create a ~/.config/chromium-flags.conf file:

Restart the browser, go to the chrome://version/, and check options:

Okay, it worked for the Chromium – but Brave still uses the “basic” option.

For the Brave browser in Arch Linux, you can create a ~/.config/brave-flags.conf file, as mentioned in this>>> comment, so we can just to copy the existing one: 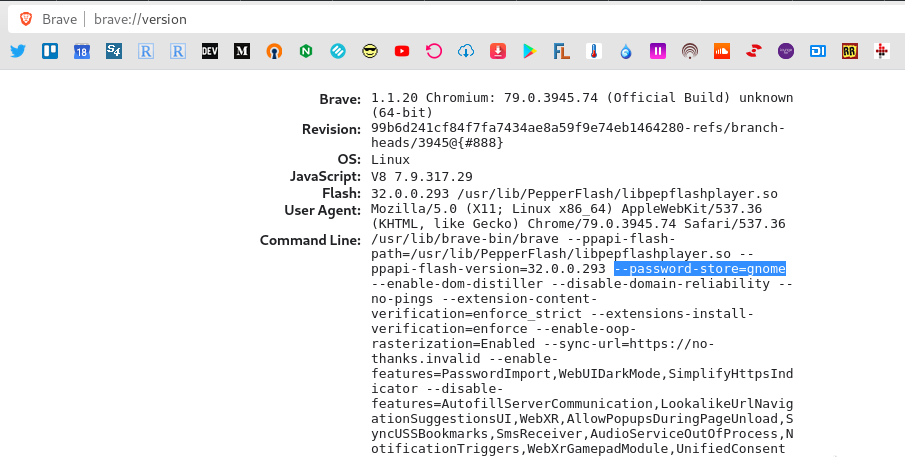