AWS VPC Flow Logs allow you to log traffic information between network interfaces in a VPC. Further, these logs can be stored in AWS S3 or sent to AWS CloudWatch Logs, while enabling traffic logging does not affect the performance of the network interface in any way.

Let’s briefly review the basic concepts, and available settings, and set up Flow Logs for VPC with data transfer for analysis to CloduWatch Logs.

Services for which you can use Flow Logs:

The data is recorded as an flow log records,  and uses a record with predefined fields.

What can be tracked with Flow logs?

Each entry in the log is data about the IP traffic received during the aggregation interval and is a line with fields separated by spaces, where each field contains information about the data transfer, for example – Source IP, Destination IP, and a protocol.

By default, the following format is used:

See the Available fields table in the documentation, everything in the Version 2 column is included in the default format.

When creating Flow Logs, we can use the default format, or create our own – we will consider it below: 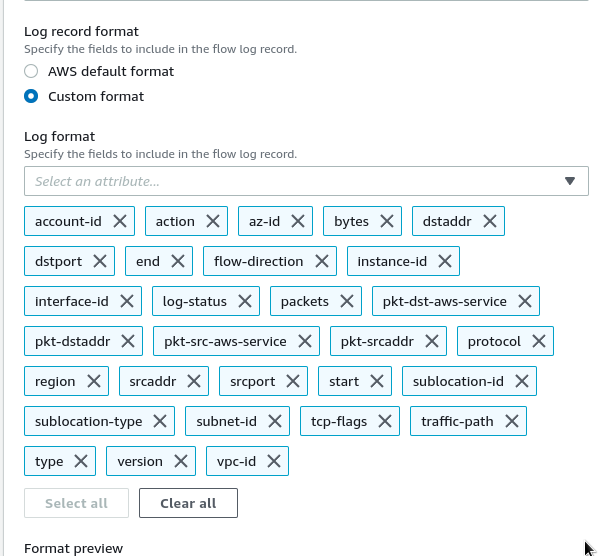 Also, keep in mind that:

To create a Flow Log, we need to specify:

For now, let’s see what happens with CloudWatch Logs, and next time we’ll try to visualize in Kibana. 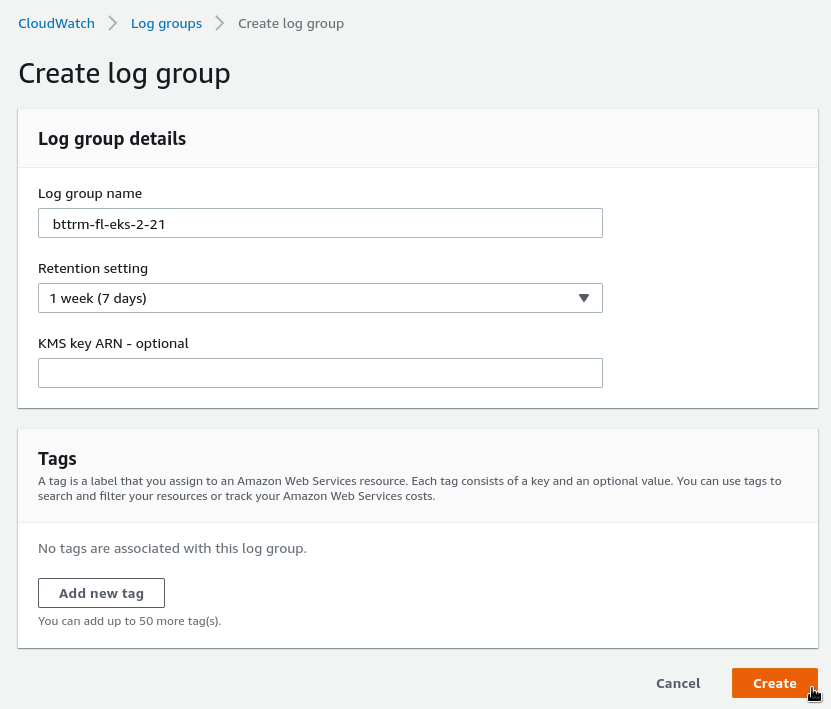 In order for the Flow Logs service to be able to write to our CloudWatch, we need to configure its access rights.

Go to the AWS IAM, and create an IAM Policy and an IAM Role. 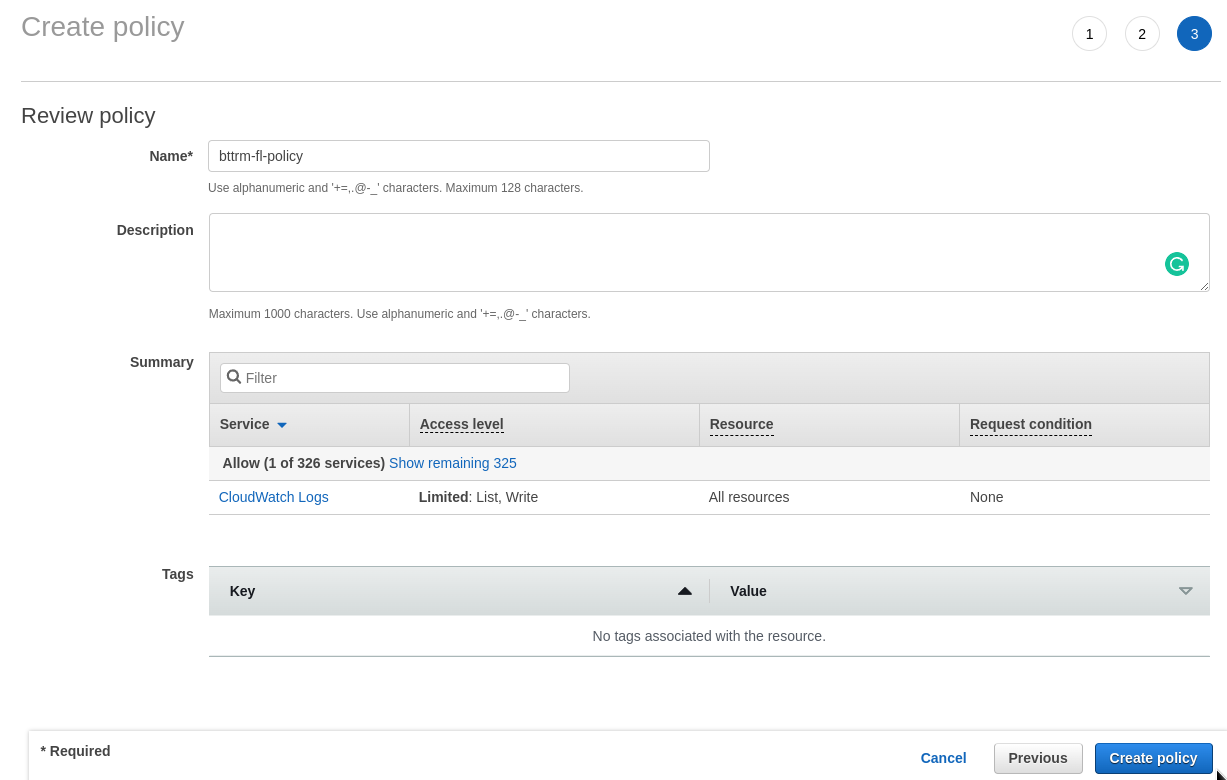 Go to the IAM Roles, create a new one, type of EC2:

Find the policy, we’ve created above, and attach it:

Set its name, save: 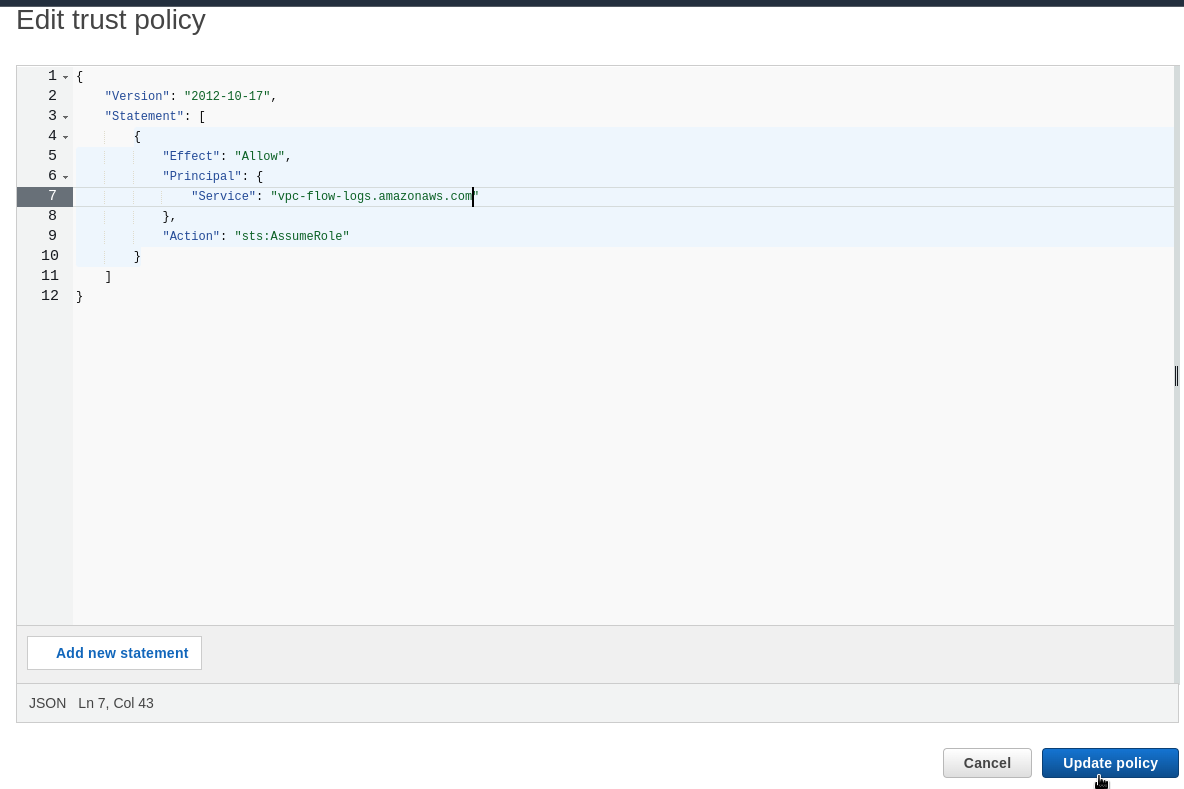 And finally, go to a VPC to enable Logs – click on the Flow Logs > Create:

In the Destination chose CloudWatch Logs, specify the Log Group and IAM Role: 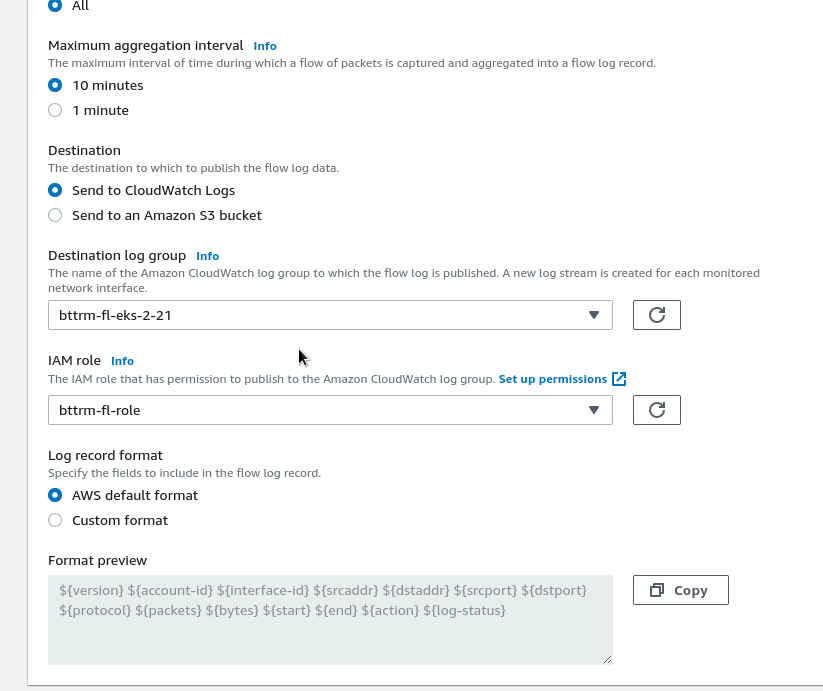 And in a couple of minutes we’ll see our data: 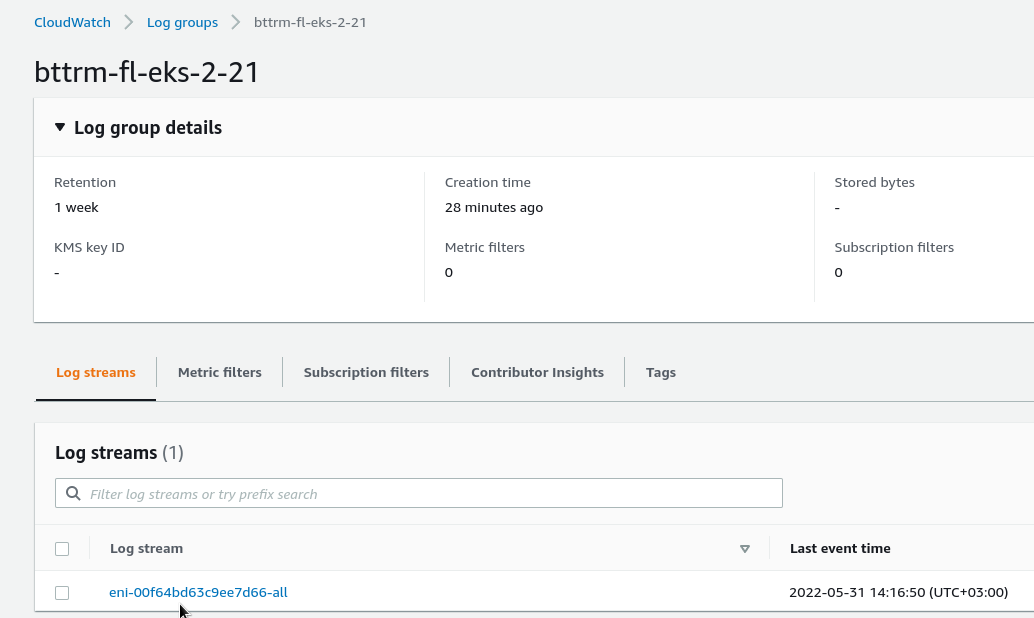 In the Log Group you can find a first stream named by an Elastic Network Interface, from where the data is taken:

Let’s take a quick look at the CloudWatch Logs Insights.

For example, to find top-15 of hosts, that served most of the packets:

Or by volume of data transferred:

Okay, that’s good. But what about other forms?

For example, I’d like to see a requests direction (egress/ingress), and a value of the pkt-dstaddr field.

For now, we can set the following format:

In the CloudWatch Logs create a new Log group, call it bttrm-eks-dev-1-21-vpc-fl-custom, don’t forget about retention: 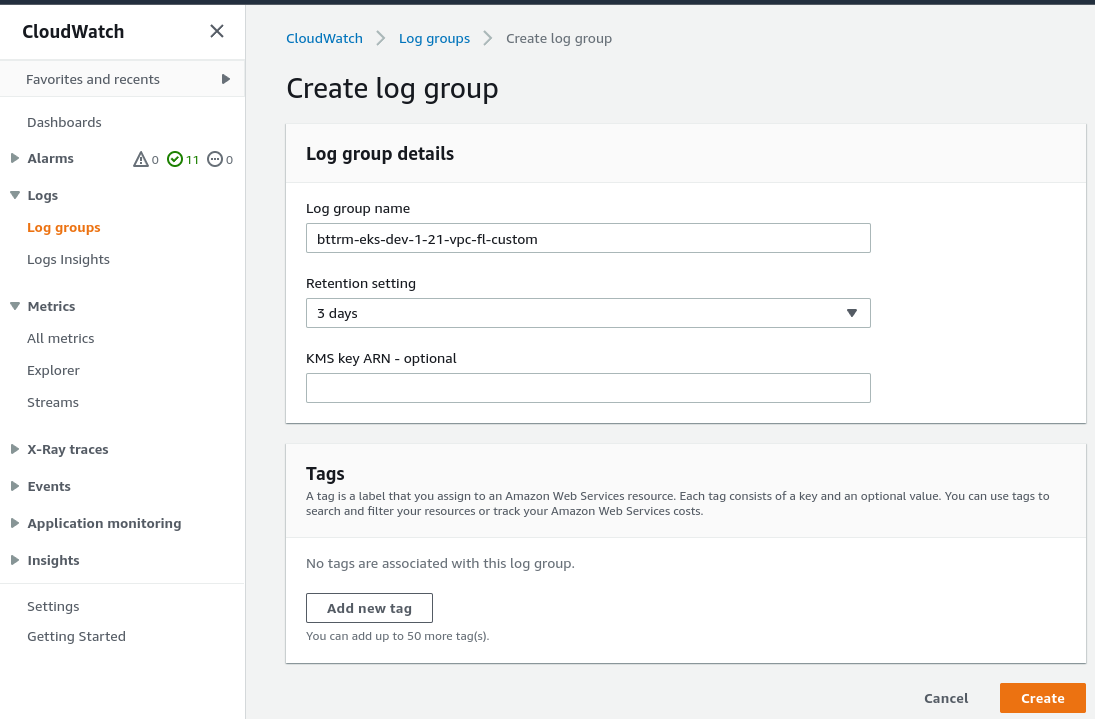 Go back to the VPC, create a new Flow Log, and call it bttrm-eks-dev-1-21-vpc-fl-custom: 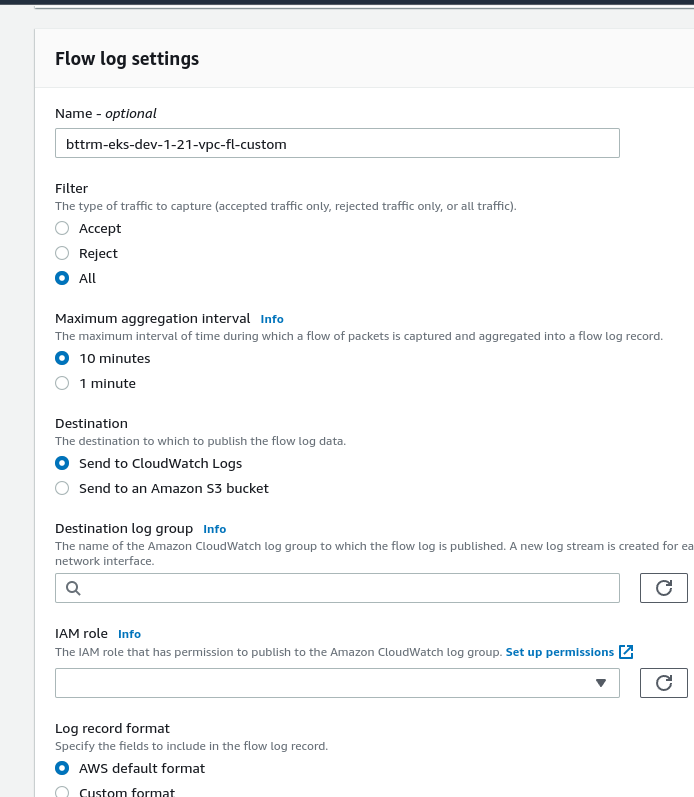 Chose the Custom Format and fields, which we’d like to see. In doing so, take into account that the order of fields you’ll specify here will be used to order records in the log. 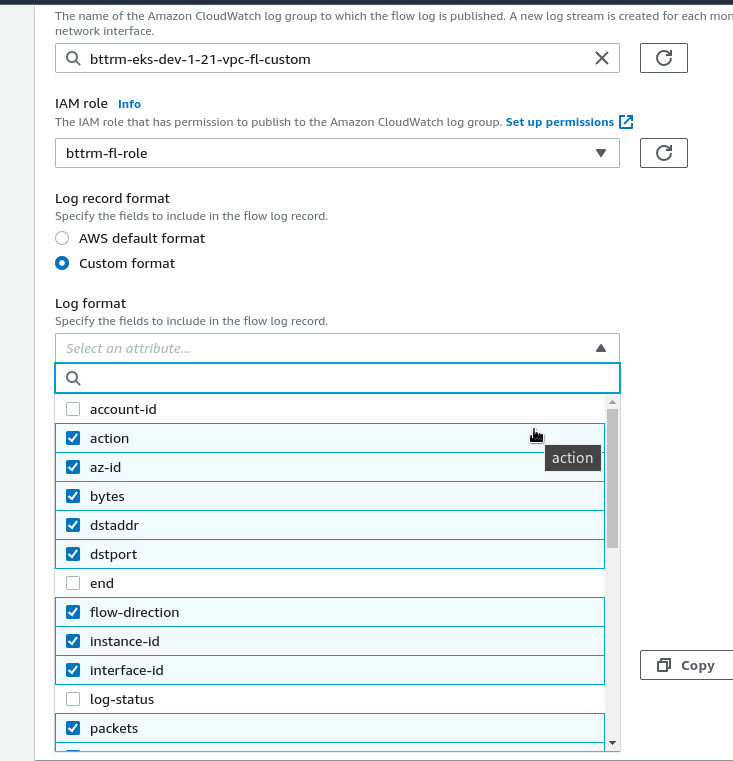 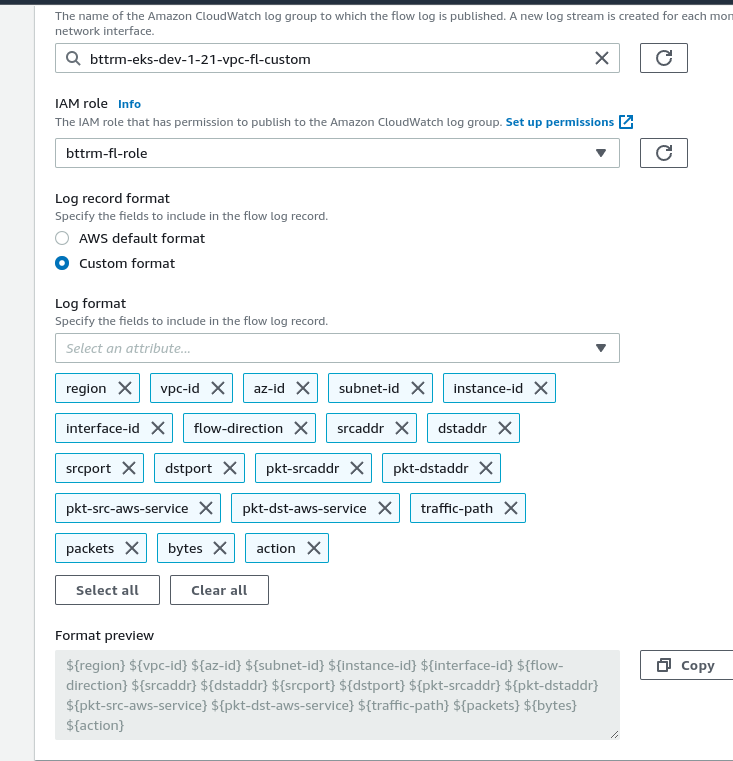 But if we will go to the CloudWatch Logs Insights now, and will try any query used before, we will not get the fields, that we’ve set 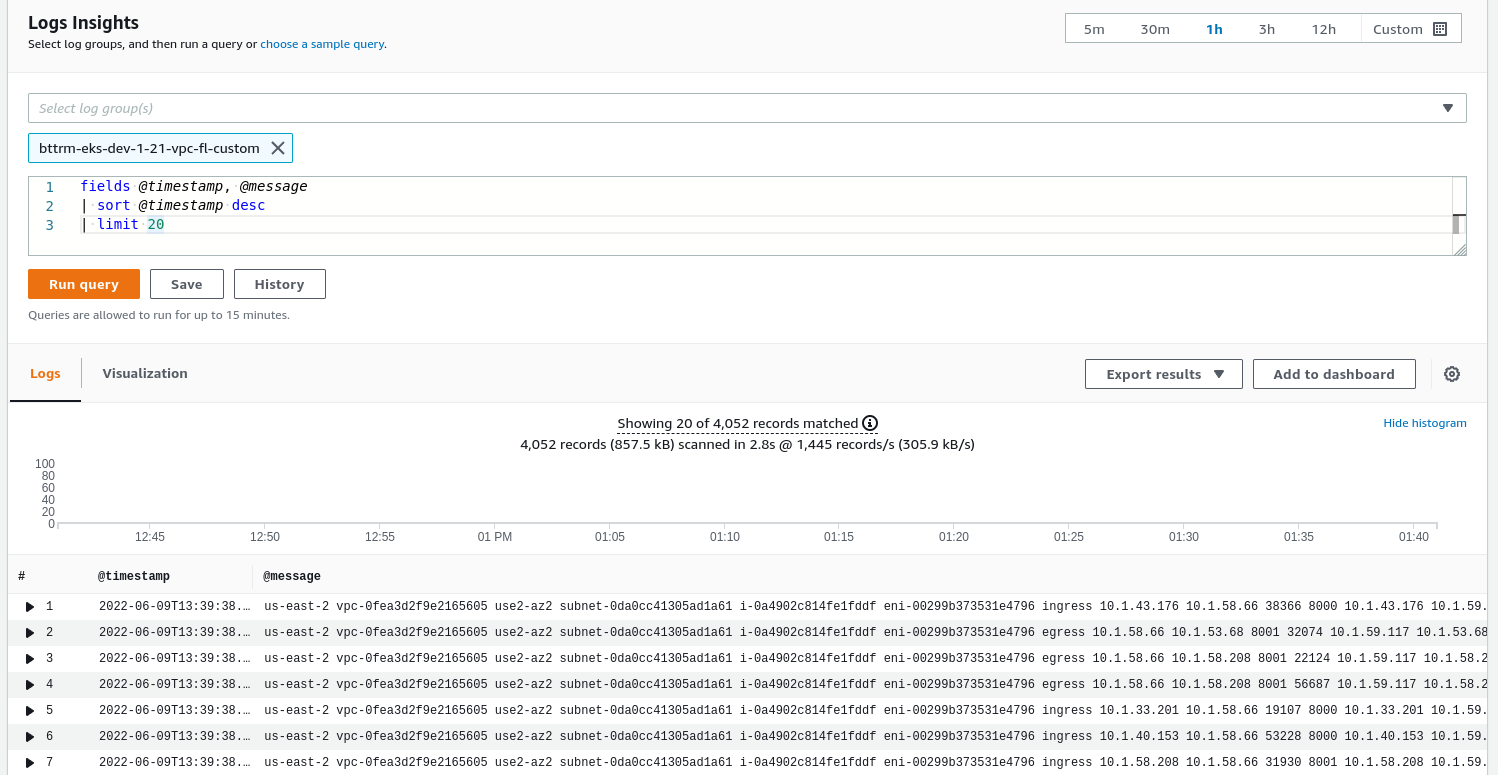 So, we can see the data, but how can we split it into the fields?

In our project, I don’t think we will use CloudWatch Logs a lot, most likely data will be sent to an S3 bucket, and then to the (logz.io), therefore, I will not go deep here in detail, but let’s see the principle of operation – it will come in handy later for working with ELK.

CloudWatch Logs by default creates several meta fields that we can use in requests:

For the Custom format to see the fields, we need to use the parse and pass the @message to it, so it will parse the content by the fields we specified:

Also, the names of the fields must contain no dashes. I.e. the ${vpc-id} name we need to eat as vpc_id (or vpcID – as you like).

Wow! Now, we got all our fields.

Beside of the parse, we can use filter, display, stats. See all in the CloudWatch Logs Insights query syntax.

And let’s try to make a couple of queries, for example – to get all requests that were blocked by a SecuirtyGroup/Network Access List – they’ll be marked as REJECTED.

So, the full query now will be: 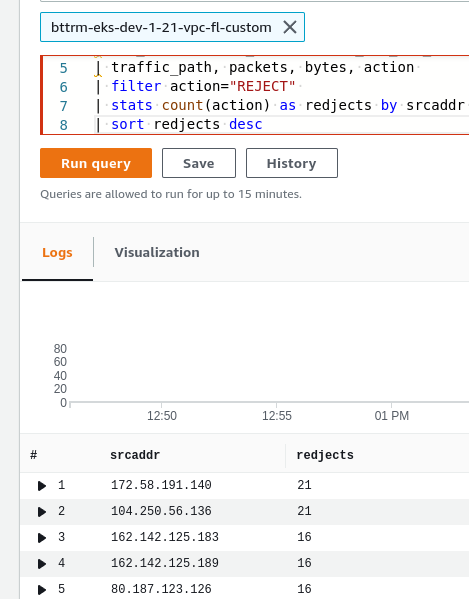 We also can use negative filters and combine the with the and/or operators.

And add a filter to select only incoming requests – flow_direction == ingress: 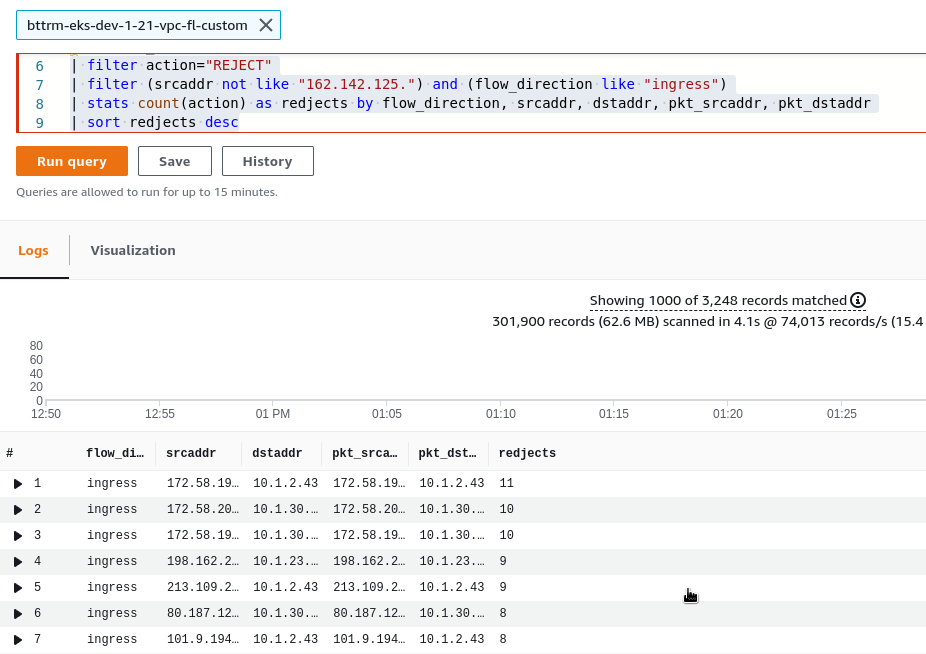 Now, we got the top of rejected requests, when a SecurityGroup or VPC Network Access List rule worked.

And let’s check what is the IP in the dstaddr – who was the final destination?

Go to the EC2 > Network Interfaces, find by the Private IP:

OK, it’s one of the Load Balancers.

If an IP can’t be found in the AWS, it could be a Kubernetes Endpoint, check it with the: