We have a VPC with OpenVPN Access Server running. This VPC is connected with other VPCs in our AWS account.

The issue is that currently when a user is connected to VPN for the DNS resolution into EC2 instances private IPswe are using dnsmasq service on the VPN-host which has a /etc/dnsmasq.hosts file where are manually added private IPs for necessary domains.

You can read more about the current setup in the OpenVPN: настройки DNS и dnsmasq post (Rus).

The post below describes configuring DNS resolution between VPC with OpenVPN and VPC with ЕС2 where we have our Bitwarden passwords manager running (see Bitwarden: an organization’s password manager self-hosted version installation on an AWS EC2). This ЕС2 has Elastic IP attached, and there is domain name accounts.example.com which is pointed to this EIP via AN A record.

Docs – DNS Support in Your VPC.

If a VPC has no DNS Hostnames enabled – first need to turn it on.

Then VPC will assign public domain names to public IPs for instances in this VPC which can be used then to resolve them to private IPs. 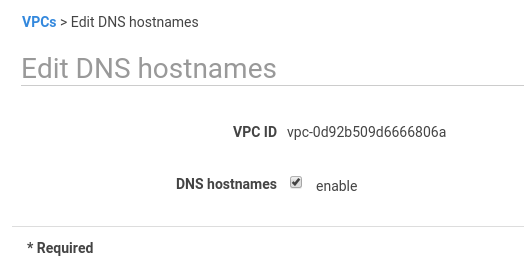 Next – turn on DNS resolution via between VPCs via their peering.

First from the office, to check DNS resolution from the world:

And now – from the host where is OpenVPN is running, to check how the resolution will work from via VPC peering:

Next need to update Route53 record for the accounts.examle.com domain, as it has IN A with Public IP of the Bitwarden’s EC2. Change it to CNAME and set the Public DNS name of this instance:

Wait a couple of minutes to propagate DNS, and check from the office again:

And from the OpenVPN instance:

DNS in the OpenVPN

Go to the VPN Settings and set a private IP of a DNS in this VPC.

DNS in a VPC always as address like <network>.2.

You can check if DNS is available from any host in this VPC:

Now go to the OpenVPN admin page and set DNS:

Connect to the VPN from the office:

And check the accounts.examle.com domain: